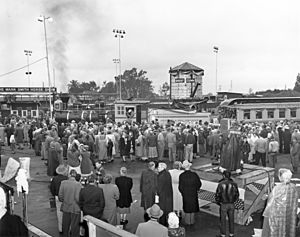 Grand Opening of the Calico Railroad in 1952.

Walter Knott began grading and laying a 3 ft (914 mm) narrow gauge railroad at his Knotts Berry Farm in 1951. He had acquired a collection of vintage rolling stock and other railroad equipment, and wanted to create a railroad experience to run it on. Service started that November, and the railroad formally opened on January 12, 1952.

The locomotives and most of the other equipment of the Ghost Town & Calico have been restored to their original liveries of Colorado's Rio Grande Southern Railroad and Denver and Rio Grande Western Railroads.

The roster includes two C-19 2-8-0 "Consolidation" type steam locomotives built by Baldwin Locomotive Works for the Denver & Rio Grande in 1881. When retired from service in Colorado, they were D&RGW No. 340 Green River (formerly D&RG #400, named Gold Nugget No. 40 for many years on the GT&C) from the Denver & Rio Grande Western and RGS No. 41 Red Cliff (recently renamed Walter K at the 60th anniversary ceremony January 12, 2012) from the Rio Grande Southern. D&RGW No. 340 was rebuilt in 2016 and is in use, alternating services with RGS No. 41.

"Galloping Goose" motor rail buses kept the Rio Grande Southern railroad viable from the 1930s by carrying mail. Their last use was to scrap their own line in 1953. Knott purchased the RGS Motor #3, which is run on the GT&C during the off-season – when there aren't sufficient passengers to justify hostling a steam locomotive. The Galloping Goose was constructed from a Pierce-Arrow limousine frame, engine, radiator, cowling and body with a four-wheel truck at the front and putting flanged wheels on the rear axle. Later a bogie truck replaced the rear axle, linked to the front truck by a chain drive. A RGS shop-built freight box (converted with trolley seats for passenger service in 1950) articulates on the kingpin over the chain driven center truck. The wooden limousine body was replaced after World War II with a 1939 Wayne military-surplus bus body with both left and right doors. The Pierce-Arrow gasoline engine has been replaced, first with a war-surplus GMC gasoline engine at the RGS, then at Knott's with a war-surplus 6 cylinder in-line Diamond-Reo gasoline engine. In 1997 the engine was replaced once more with a Cummins Diesel engine supported with an I-beam frame extension salvaged from the demolished Windjammer Surf Racers roller coaster.

In late 1973, the park received ex-D&RGW K-27 #464, a Mikado 2-8-2 locomotive. However, due to clearance issues, Knott's later donated the locomotive to the Huckleberry Railroad in Flint, Michigan.

Around 2010, Knotts Berry Farm became the home to an H.K. Porter 0-4-0ST tank locomotive "Jennie K.". The planned restoration of this locomotive did not happen and it was sold in 2017 to Garner Holt of Garner Holt Productions, who is planning to restore it to operating condition.

When the route opened on January 12, 1952 for passenger service, the locomotives would haul several yellow vintage closed-vestibule wooden passenger coaches led by a No. 103 parlor car Chama which was converted at Knott's in 1954 to combination baggage/coach Calico with arrows simulating an Indian attack embedded near the baggage door. The arrows have since been removed and the cars have been painted in heritage period Pullman-green livery of D&RGW. The consist also includes a gondola (converted from a flat car for open-air passenger seating), and a stock car which was converted from a gondola, fitted with side benches and a wheelchair lift. Rio Grande Southern 0402 is the only caboose on the railroad and is used today.

The parlor car Durango restored in 2011, the Silverton observation sleeper and the No. B-20 Edna were held with the short two axle way car "bobber" caboose and a wooden box car D&RGW No. 3350, on sidings during normal operation. Nowadays the Silverton has been converted to revenue service as a chair coach, and the caboose serves to embark bandits while in motion.

The Business car B-20 Edna (formerly San Juan) was built for use by the Rio Grande Southern president Otto Mears on sidings and spurs as a portable office and temporary home while making track orders. She is fitted with

Track inspection as well as observation is facilitated by the open vestibule and enlarged end windows. These were deluxe temporary accommodations compared to a caboose, but it was far less opulent than private varnish of its day, which pales by comparison to the amenities offered aboard today's motor homes and recreational vehicles such as a shower or microwave oven. 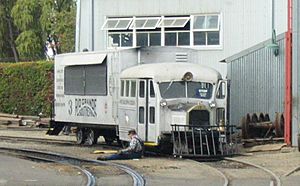