In the 1920s, Knott was a somewhat unsuccessful farmer whose fortunes changed when he nursed several abandoned berry plants back to health. The hybrid boysenberry, named after its creator, Rudolph Boysen, was a cross between a blackberry, red raspberry and loganberry. The huge berries were a hit, and the Knott family sold berries, preserves and pies from a Buena Park, California roadside stand. In 1934, Knott's wife Cordelia (née Hornaday, January 23, 1890 – April 12, 1974) began serving fried chicken dinners, and within a few years, lines outside the restaurant were often several hours long.

To entertain the waiting crowds, Walter built a Ghost Town in 1940, using buildings relocated from Old West towns. In 1940 Walter sent his son Russel to Twentynine Palms, California. Russel was helped by a local resident Daniel F. Leahy who took Russel to the Old Calico Ghost Town in the hills just northeast of Twentynine Palms. "Very soon after this visit Walter purchased a number of Calico's buildings. There were carefully disassembled, trucked, and reassembled in Buena Park." (see pages 160-161 in For Those Who Served by Michael H. Pazeian). Even after Disneyland opened in 1955 only 8 miles (13 km) away, Knott's Berry Farm continued to thrive. Walt Disney and Walter Knott are rumored to have had a cordial relationship; it is known that they each visited the other's park, and they were both members of the original planning council for Children's Hospital of Orange County. Early additions to the farm included the Ghost Town & Calico Railroad, a narrow gauge railroad in the Ghost Town area, a San Francisco cable car, a Pan-for-Gold attraction, the Calico Mine Train dark ride and the Timber Mountain Log Ride log flume ride. In 1968, the Knott family fenced the farm, charged admission for the first time, and Knott's Berry Farm officially became an amusement park. 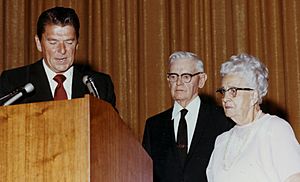 Ronald Reagan speaking at the Knotts' 60th wedding anniversary in 1971

Because of his interest in American pioneer history, Knott purchased and restored the real silver mining ghost town of Calico, California in 1951. As a child, Walter spent a lot of time in Calico living with his uncle. During World War I he helped to build a silver mill in Calico. This period in his life influenced his decision to buy the town and restore it. In 1966, he deeded Calico to San Bernardino County, California. 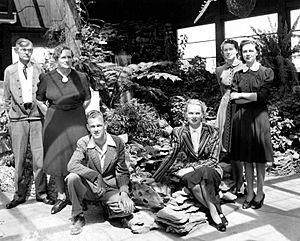 Walter remained active in the operation of Knott's Berry Farm until the death of Cordelia in 1974, at which point he turned his attention toward political causes, leaving day-to-day park operations to his children. He supported conservative Republican causes. He was also a member of the John Birch Society and sponsored its Orange County chapter.

Walter Knott appeared on the December 23, 1954 episode of You Bet Your Life, hosted by Groucho Marx.

The Knott family no longer owns the theme park; it was sold to the Cedar Fair Entertainment Company. Additionally, The J.M. Smucker Co. now owns the "Knott's Berry Farm" brand of jam and jelly (purchased from ConAgra Foods in 2008).

On December 3, 1981, just 8 days shy of his 92nd birthday, Knott died from Parkinson's disease in his home in Buena Park, California. He was 91 years old. Knott is buried at Loma Vista Memorial Park in Fullerton, California.

All content from Kiddle encyclopedia articles (including the article images and facts) can be freely used under Attribution-ShareAlike license, unless stated otherwise. Cite this article:
Walter Knott Facts for Kids. Kiddle Encyclopedia.