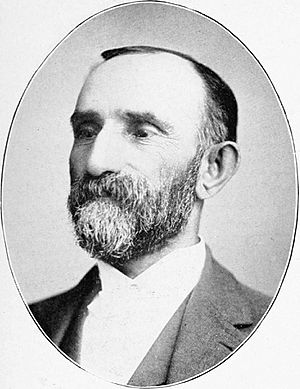 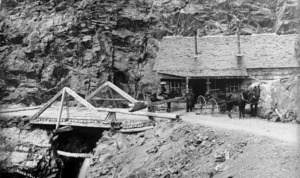 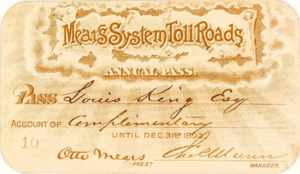 1892 pass to use the Mears system toll roads

Otto Mears (May 3, 1840 – June 24, 1931) was a famous Colorado railroad builder and entrepreneur who played a major role in the early development of southwestern Colorado.

Mears was known as the "Pathfinder of the San Juans" because of his road and railroad building projects through Colorado's San Juan Mountains in the late 19th century. He built hundreds of miles of toll roads in the rough terrain of the young state of Colorado, notably the Million Dollar Highway over Red Mountain Pass, connecting Silverton to Ouray.

Born in Estonia formerly part of Russia of Jewish parentage to a Russian mother and a British father, Otto Mears was orphaned at age 3. He was sent as a boy to the United States to live with relatives who had emigrated there, and sailed to San Francisco at age 11 where he lived on his own as an orphan without relatives.

Mears served in the California Volunteer Infantry during the Civil War. He was mustered out in late 1864 and stayed in New Mexico managing the Gallup Mercantile Co.

Later Mears worked the gold fields of California before settling in Colorado, where he would make his name. He initially settled in Conejos County in Colorado Territory, but soon moved to Saguache, Colorado, then to the San Juans.

A wheat farmer in Saguache, Mears first built a road over Poncha Pass to gain access to the flour mill at Nathrop, which served the Leadville market. Mears told a story many times in his life that his decision to become a road builder followed an encounter with William Gilpin, former Territorial Governor of Colorado, on Poncha Pass while struggling to bring his flour to market over the poorly built road. He applied to the Colorado legislature for toll road charters for his roads and built the roads in conformations and at grades suitable for railways. His routes over Poncha Pass and Marshall Pass were purchased for road beds by the Denver and Rio Grande railway.

Mears built several railroads during his 91 years, including the Rio Grande Southern Railroad from Durango to Ridgway, the Silverton Railroad, and the Silverton Northern Railroad. Several of his railroads were narrow gauge. From 1888 to 1892, Mears issued special railroad passes to dignitaries and friends to allow them to ride free on any of his lines. Some of these rare passes were made of silver or gold and are now highly prized collectors' items. A Master List of all of the presently known Otto Mears unique passes for the Silverton Railroad and the Rio Grande Southern Railroad is on line at San Juan County Historical Society.org under "Mears Passes".

In 1876, the state legislature selected Mears as one of Colorado's three presidential electors supporting Republican Rutherford B. Hayes. In the 1880s, Mears was elected to the Colorado legislature. The panic of 1893 reduced the value of his investments. He had to sell much property and lost control of his railroad holdings.

Mears moved to the East Coast and became involved in railroad and manufacturing ventures there. One of his most successful railroads on the east coast was the Chesapeake Beach Railway, which ran between Washington DC and southern Maryland.

The dome of the Colorado State Capitol building was originally covered in copper. After the weather tarnished the copper sheathing, Mears suggested covering the dome with gold. He persuaded the Colorado Mining Association to donate 200 ounces of gold for the project, and by 1908, the dome's first gilding was complete.

In 1964, he was inducted into the Hall of Great Westerners of the National Cowboy & Western Heritage Museum.

Mears Peak in the San Juan Mountains is named after him.

All content from Kiddle encyclopedia articles (including the article images and facts) can be freely used under Attribution-ShareAlike license, unless stated otherwise. Cite this article:
Otto Mears Facts for Kids. Kiddle Encyclopedia.