The City of Durango is the county seat and the most populous municipality of La Plata County, Colorado, United States. It is home to Fort Lewis College. The United States Census Bureau reported a population of 16,887 in the 2010 census. The city is a Home Rule Municipality.

The town was organized in September 1880 to serve the San Juan mining district. The Denver and Rio Grande Railroad (D&RG) chose the site on the Animas River for its depot following a brief and most likely perfunctory negotiation with Animas City, two miles to the north. The city was named by ex-Colorado Governor Alexander C. Hunt after Durango, Mexico, based on favorable impression of that city resulting from a scouting trip undertaken on the behalf of William J. Palmer, the head of the D&RG.

Area archaeological sites on the State and National historical registers include:

According to the Köppen climate classification system, Durango has a warm-summer, humid continental climate (Dfb). The average annual precipitation is 19.33 in (491 mm). Its hardiness zone is 5b.

There were 5,492 households out of which 22.4% had children under the age of 18 living with them, 34.2% were married couples living together, 9.4% had a female householder with no husband present, and 52.6% were non-families. 31.8% of all households were made up of individuals and 9.0% had someone living alone who was 65 years of age or older. The average household size was 2.23 and the average family size was 2.83.

The annual Durango Ragtime & Early Jazz Festival features noted musicians from around the country. It is held in the Strater Hotel, a historic Victorian hotel in Durango.

Durango is most known for the Durango & Silverton Narrow Gauge Railroad, a heritage railway, which travels from Durango to the historic mining town of Silverton, Colorado on steam-powered trains with rolling stock dating back to the 1920s and before.

Durango is home to the Snowdown Festival, an event that has a new, original theme each year, and includes a single firework to start off the ever popular light parade. The parade is the centerpiece and usually occurs the last Friday of January or the first Friday of February. Many local businesses hold competitions throughout the week, including a beard growing contest, joke off, hot wing eating contest, beer plunge, outhouse stuffing and many others. 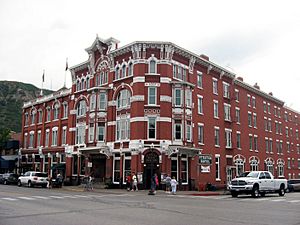 Main Avenue cuts through Downtown Durango, home to clothing boutiques, restaurants, newsstands, tourist and gift shops, a mall, bars, lounges and other businesses. Many buildings downtown are several stories high and include apartments in the upper levels. Durango's two oldest hotels, The General Palmer and The Strater Hotel, are both at the South end of Main Avenue, one and two blocks away from the train station, respectively. It is also home to many restaurants. Durango has more restaurants per capita than Denver. Many serve specialty foods including Mexican, Italian, French, Thai and Japanese and others serve American favorites. Main Avenue is walked by thousands of tourists each week, making it the most popular shopping and relaxing tourist destination in Durango.

All content from Kiddle encyclopedia articles (including the article images and facts) can be freely used under Attribution-ShareAlike license, unless stated otherwise. Cite this article:
Durango, Colorado Facts for Kids. Kiddle Encyclopedia.