A map of the Southern Ute Reservation and nearby reservations 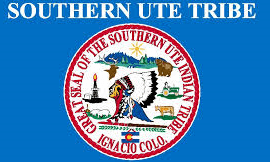 The Southern Ute Indian Reservation is a Native American reservation in southwestern Colorado near the northern New Mexico state line. Its territory consists of land from three counties; in descending order of surface area they are La Plata, Archuleta, and Montezuma Counties. The reservation has a land area of 1,058.785 sq mi (2,742.24 km²). Its largest communities are Ignacio and Arboles. The only other community that is recognized as a separate place by the Census Bureau is the CDP of Southern Ute, which lies just southeast of Ignacio.

The Southern Ute Indian Reservation was opened in southwestern Colorado. The tribes that originally resided there were the Muache, Capote, and the Weeminuche. These tribes were considered the Southern Utes. There was a half blood Ute Indian from the Ucompahgre band named Ouray who was appointed by president Lincoln as head of all Ute tribes, which the southern Ute bands did not agree with them. The first reservation created by the treaty of 1868 encompassed about 1/3 of present-day Colorado, mostly the mountainous regions west of the continental divide. When precious metals and minerals were discovered in the central mountains settlers sought access to the land. In 1873 The Brunot Agreement was created. This agreement limited the reservation to the narrow strip of land that is called The Southern Ute Reservation today. The United States also made treaties with various bands of Ute in 1855, 1865, and 1866, which the Senate failed to ratify. Initially given the whole of eastern Colorado for a reservation, the discovery of gold there in the 1860s brought a quick reduction in territory. The treaty with the Ute in 1865 provided for the cession of land in exchange for the entire valley of the Uintah River in Utah, plus $25,000 per year for ten years, then $20,000 for 20 years, and thereafter $15,000 per year, based on an estimated population of 5,000 Ute. The treaty also banned liquor and provided for the establishment and maintenance of a manual labor school for ten years.

The eastern part of the reservation is forest with elevations of more than 9000 feet. The western portion is mostly arid mesa. The actual land lies in the southwestern corner of the state of Colorado and consists of a strip fifteen miles wide (north to south) and one hundred and ten miles long. What was originally one long, narrow reservation in the south-western corner of Colorado has been reduced. A portion of the Ute Mountain Reservation extends into New Mexico. In 1895, the Hunter Act made allotments of individual land available to the Indians instead of having them hold it collectively, as a tribe. The Mountain Utes optd for collective ownership, but the Southern Utes went with individual ownership. After the Southern Utes took 160 acres apiece, the balance was thrown open to settlers but some land went unclaimed and reverted to the Southern Ute tribe. The result was that the Southern Ute Reservation is divided into collective and individual plots.

During the late 1870s a railroad line was built that cut through the reservation. White settlers arrived to build and work on the railroad. There were many quarrels between the Indians and the settlers over use of the land. Tensions increased and an incident known as the Beaver Massacre occurred in which 11 Indians were killed by stockmen who accused them of butchering some of the settlers' cattle. The Meeker Massacre occurred on Sept. 29, 1879 when the Indian agent Nathan Meeker and his men were killed. During this event the Indians took Meeker's wife and daughters as hostages. They were eventually released. Another treaty was created in 1880, in this treaty the southern Utes agreed to settle on the La Plate River within their reservation. During the 1880s the government sought trying to keep the peace between the Indians and the settlers. Indian fairs became a big event on the Southern Ute Reservation starting in 1907. At first the Indians were judged separately but by 1916 the Utes were in open competition with their neighbors. The Indians did well with their exhibits and won their fair share of prizes. The Durango newspaper reported "Awards given out yesterday show that the agency and farm has not a single 'loafing Indian'. The Utes have been successful, [as] perhaps no other reservation in the United States could boast in a competition with whites at a county fair". The superintendent reported there were no Indian dances (which were discouraged) at any of the fairs. In 1895 The Hunter Act distributed the land in the reservation in plots to the heads of households in the Mouache and Capote tribes. The Weeminuche tribe had approved an 1888 congressional bill relocating them to San Juan County, Utah, however this bill did not pass so the Weeminuche were brought back to Colorado. They refused to go back to the old grounds of the agency so they established camps on the western end of the Southern Ute Reservation. With the three tribes given their land the final provisions of the Hunter Act were implemented opening over 500,000 acres of the Reservation to non-native settlers.

Established in 1873, it is the reservation of the Southern Ute Indian Tribe, a federally recognized Ute tribe.The southern Utes are made up of two bands, the Mouache and the Capote.Government is organized under the Indian Reorganization Act of 1934 and is led by a tribal council with a chairman as head of the executive. For decades at the end of the 20th century, Leonard C. Burch had been the tribes chairman. In 2008 a new chairman, Matthew Box was elected. There have been numerous council members, with some being elected to council many times, but they all serve one purpose, and that is to serve the tribal membership for their best interest. Leonard C. Burch was the most popular chairman to ever serve for the tribal population. When Matthew Box was elected he won in a runoff election against Clement J. Frost. The Southern Ute Indian Tribe is currently the largest employer in the Four Corners, being a stupendous and competitive organization. With being on the top-ten list of wealthiest tribes in America, the Southern Utes also put their priority to their spiritual traditions as well as their compatibility towards the non-Indian people. They supply numerous non-Indians with employment that benefits themselves in many ways. By creating a "checkerboard reservation", the Southern Utes created a relationship with the non-Indians that they knew was imminent.

Matthew Box Resigned in 2011. Under a Special election Pearl Casias was elected as the first Chairwomen in the history of the Tribe. Jimmy Newton was the current Chairperson until death.

All content from Kiddle encyclopedia articles (including the article images and facts) can be freely used under Attribution-ShareAlike license, unless stated otherwise. Cite this article:
Southern Ute Indian Reservation Facts for Kids. Kiddle Encyclopedia.