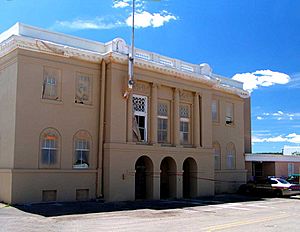 Tierra Amarilla is a small unincorporated community near the Carson National Forest in the northern part of the U.S. state of New Mexico. It is the county seat of Rio Arriba County.

Tierra Amarilla is Spanish for "Yellow Soil". The name refers to clay deposits found in the Chama River Valley and used by Native American peoples. Tewa and Navajo toponyms for the area also refer to the yellow clay.

There is evidence of 5000 years of habitation in the Chama River Valley including pueblo sites south of Abiquiu. The area served as a trade route for peoples in the present-day Four Corners region and the Rio Grande Valley. Navajos later used the valley as a staging area for raids on Spanish settlements along the Rio Grande. Written accounts of the Tierra Amarilla locality by pathfinding Spanish friars in 1776 described it as suitable for pastoral and agricultural use. The route taken by the friars from Santa Fe to California became the Spanish Trail. During the Californian Gold Rush the area became a staging point for westward fortune seekers. 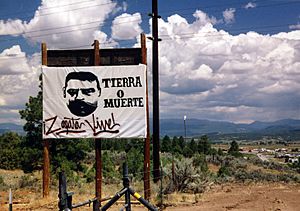 The Tierra Amarilla Grant was created in 1832 by the Mexican government for Manuel Martinez and settlers from Abiquiu. The land grant encompassed a more general area than the contemporary community known as Tierra Amarilla. The grant holders were unable to maintain a permanent settlement due to "raids by Utes, Navajos and Jicarilla Apaches" until early in the 1860s. In 1860 the United States Congress confirmed the land grant as a private grant, rather than a community grant, due to mistranslated and concealed documents. Although a land patent for the grant required the completion of a geographical survey before issuance, some of Manuel Martinez' heirs began to sell the land to Anglo speculators. In 1880 Thomas Catron sold some of the grant to the Denver and Rio Grande Railway for the construction of their San Juan line and a service center at Chama. By 1883 Catron had consolidated the deeds he held for the whole of the grant sans the original villages and their associated fields. In 1950, the descendants of the original grant holder's court petitions to reclaim communal land were rebuked.

In 1866 the United States Army established Camp Plummer just south of Los Ojos (established in 1860) to rein in already decreased Native American activity on the grant. The military encampment was deserted in 1869. Las Nutrias, the site of the contemporary community, was founded nearby c.1862. The first post office in Las Nutrias was established in 1866 and bore the name Tierra Amarilla, as did the present one which was established in 1870 after an approximately two-year absence. In 1877 a U.S. Army lieutenant described the village as "the center of the Mexican population of northwestern New Mexico". The territorial legislature located Rio Arriba's county seat in Las Nutrias and renamed the village in 1880. The Denver and Rio Grande Railway's 1881 arrival at Chama, about ten miles to the north, had profound effects on the development of the region by bringing the area out of economic and cultural isolation.

When Tierra Amarilla was designated as the county seat the villagers set about building a courthouse. This structure was demolished to make way for the present one, which was built in 1917 and gained notoriety fifty years later when it was the location of a gunfight between land rights activists and authorities. The neoclassical design by Isaac Rapp is now on the National Register of Historic Places.

The Alianza Federal de Mercedes, led by Reies Tijerina, raided the Rio Arriba County Courthouse in 1967. Attempting to make a citizen's arrest of the district attorney "to bring attention to the unscrupulous means by which government and Anglo settlers had usurped Hispanic land grant properties", an armed struggle in the courthouse ensued resulting in Tijerina and his group fleeing to the south with two prisoners as hostages. Eulogio Salazar, a prison guard, was shot and Daniel Rivera, a sheriff's deputy, was badly injured. The National Guard, FBI and New Mexico State Police successfully pursued Tijerina, who was sentenced to less than three years.

The Brazos Cliffs are a prominent nearby landmark and attraction. Also nearby are the artificial Heron Lake and El Vado Lake. Tierra Amarillas' Elevation is 7,524 feet above sea level.

The settlement is situated in a cluster of villages along United States Route 84 and the Chama River. The layout of the villages, including the one that became Tierra Amarilla, do not follow the urban planning principles of the Laws of the Indies.

All content from Kiddle encyclopedia articles (including the article images and facts) can be freely used under Attribution-ShareAlike license, unless stated otherwise. Cite this article:
Tierra Amarilla, New Mexico Facts for Kids. Kiddle Encyclopedia.