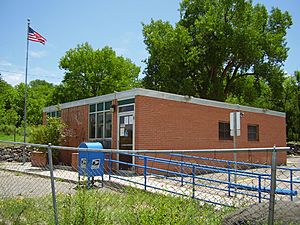 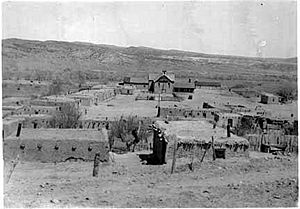 Abiquiú church and plaza around 1920.

Abiquiú ( Tewa: Péshú:bú'; Northern Tiwa: Gultɨdda) is a census-designated place in Rio Arriba County, in northern New Mexico in the southwestern United States, about 53 miles (85 km) north of Santa Fe. As of 2010, the population was 231. Abiquiú's one school, an elementary school, is part of the Española Public Schools.

Abiquiú means "wild choke cherry place" in the Tewa language. It is also called Santo Tomás de Abiquiú and the Pueblo of Santo Tomás de Abiquiú. In the mid-eighteenth century, the Spanish crown provided land grants to Genízaros here and in other places to establish buffer towns on the frontier with raiding tribes such as the Comanche.

In the 20th century, Abiquiú was one of the homes of American artist Georgia O'Keeffe from 1929 until 1984. The Georgia O'Keeffe Home and Studio is in Abiquiú. The artist also owned property at the nearby Ghost Ranch. Many of her paintings depict scenes near Abiquiú.

Abiquiú was the starting point of the pioneering route of the Old Spanish Trail. This first route, the Armijo Route, was led by Antonio Armijo of Santa Fe, with a sixty mounted men and a caravan of pack animals carrying blankets and other trade goods to barter for mules in Alta California. Armijo's caravan left on November 6, 1829 made the journey from Abiquiu to San Gabriel Mission in eighty-six days, arriving on January 31, 1830. He returned by the same route in 56 days, leaving March 1st and arriving back on April 25, 1830. Unlike the other routes of the Old Spanish Trail, Armijo's route was documented day by day by him, although in a very brief report listing dates and stopping places with few details and no distances recorded. It was submitted to the governor José Antonio Chaves and published by the Mexican government on June 19, 1830.

It is in Española Public Schools. The comprehensive public high school is Española Valley High School.

All content from Kiddle encyclopedia articles (including the article images and facts) can be freely used under Attribution-ShareAlike license, unless stated otherwise. Cite this article:
Abiquiú, New Mexico Facts for Kids. Kiddle Encyclopedia.