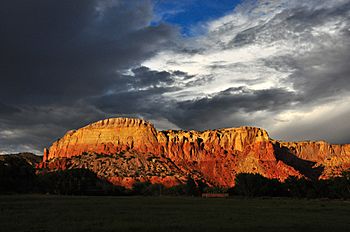 Ghost Ranch is a 21,000-acre (85 km2) retreat and education center located close to the village of Abiquiú in Rio Arriba County in north central New Mexico, United States. It was the home and studio of Georgia O'Keeffe, as well as the subject of many of her paintings.

Ghost Ranch is also known for a remarkable concentration of fossils, most notably that of the theropod dinosaur Coelophysis, of which it has been estimated that nearly a thousand individuals have been preserved in a quarry at Ghost Ranch.

Ghost Ranch is part of Piedra Lumbre (Spanish, "Shining Rock"), a 1766 land grant to Pedro Martin Serrano from Charles III of Spain. The Rito del Yeso is a stream that meanders through the canyons and gorge, providing a drought-resistant source of water for life to thrive.

The canyon was first inhabited by the Archuleta brothers, cattle rustlers who enjoyed the coverage and invisibility that the canyon provided as well as their ability to see for miles down the valley. They created two jacal homes and would move stolen cattle throughout the night to Box Canyon. By transporting the cattle through streams, footprints would be lost and they could not be tracked. Stories of people staying with the Archuleta brothers who had gone missing (and their clothing on the men) circulated around the area. One day one of the brothers made a transaction without the other, and claimed he had buried the gold for safety. Out of anger, the second brother killed the first who had hid the gold, and kept his wife and daughter hostage until they admitted to knowing where the gold was hidden. Though the mother and daughter feared the rumored spirits of the canyon, they mustered up the courage to sneak away at night through the Chama Valley. A group of local men then came to the ranch, fighting through their fear, and hung the remaining brother and his gang from the cottonwood tree by one of their casitas. Other visitors who stayed in the casita later on noted that they could hear voices of a man and a woman fighting.

Roy Pfaffle won the deed to the ranch in a poker game. His wife, Carol Stanley, took the deed, put it in her name, and divorced him the next day. Stanley sought to create a getaway, and eventually many of her friends moved to New Mexico for the peaceful atmosphere in the 1930s. One of the most influential people to visit Ghost Ranch was Arthur Newton Pack, writer and editor of Nature Magazine. Arthur's daughter suffered from bouts of pneumonia, so he and his family had to move to an area with a drier climate- he came to Stanley's ranch. Though Stanley had wealthy families coming to the ranch, she was having trouble breaking even. She then sold the ranch to Arthur Pack.

As Arthur Pack aged, he began to take concern in how the ranch will be passed on. He spoke with the YMCA, the Boy Scouts of America, the Archdiocese of Santa Fe, and the United Brethren Church about having and maintaining the ranch. But none of these organizations were in a position to accept the offer. Then, the Presbyterians accepted the offer of using the space as an educational facility, though it would be difficult for them to develop. Now, the ranch is used as an educational and retreat center, where over 300 classes are offered each year.

Georgia O'Keeffe, intrigued by Arthur Pack's statement that the Piedra Lumbre was "the best place in the world", checked out the ranch. She fell in love with the geography, and soon split her time between living in New York and New Mexico. She enjoyed having alone time, and was often very demanding of the Packs. Cerro Pedernal was a key geographical feature that could be often found in her paintings.

On July 7, 2015, a flash flood occurred in Ghost Ranch due to severe weather that destroyed several buildings at the ranch. No injuries or deaths were caused by the flood.

200 million years ago Ghost Ranch and the American Southwest were located close to the equator, and had a warm, monsoon-like climate with heavy seasonal precipitation. Ghost Ranch includes a famous palaeontological site preserving Triassic dinosaurs. Fossil bones were found here as early as 1885. In 1947 the palaeontologist Edwin H. Colbert documented the discovery of over a thousand well-preserved fossilized skeletons of a small Triassic dinosaur called Coelophysis in a quarry here. In 2007, fossil remains of Dromomeron romeri, one of the archaic group of animals recognized as basal dinosauromorphs, were found in the Hayden Quarry. In April 2010, a team of scientists led by Hans-Dieter Sues of the Smithsonian Institution reported the discovery of Daemonosaurus chauliodus, a basal theropod species, at Ghost Ranch. Daemonosaurus lived approximately 205 million years ago, during a transitional period between the oldest known dinosaurs such as Herrerasaurus, which existed during the Late Triassic period in what is now known as Argentina and Brazil, and the more advanced theropod dinosaurs.

Ghost Ranch's redrock scenery and 21,000 acres have attracted many filmmakers. Here is a partial list of films and series shot at Ghost Ranch:

Ghost Ranch was once part of the Chinle Formation, and the "New Blood" episode of Walking with Dinosaurs was set there, although the filming location was New Caledonia.

All content from Kiddle encyclopedia articles (including the article images and facts) can be freely used under Attribution-ShareAlike license, unless stated otherwise. Cite this article:
Ghost Ranch Facts for Kids. Kiddle Encyclopedia.