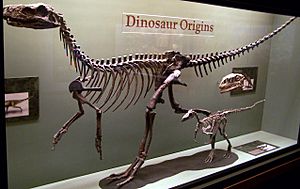 Skeleton of Herrerasaurus and Eoraptor

Herrerasaurus was one of the earliest dinosaurs. All known fossils of this carnivore have been discovered in Upper Triassic strata dated to 231.4 million years ago (mya) in northwestern Argentina.

It is a member of the Herrerasauridae, a family of similar genera that were among the earliest dinosaurs.

In a large specimen the skull measured 56 centimeters (1.8 ft) in length. Smaller specimens had skulls about 30 centimeters (1 ft) long.

The tail, partially stiffened by overlapping vertebral projections, balanced the body and was also an adaptation for speed.

The paleoenvironment of the Ischigualasto Formation (where it was found) was a volcanically active floodplain covered by forests with strong seasonal rainfall. The climate was moist and warm, with seasonal variations. Vegetation consisted of ferns (Cladophlebis), horsetails, and giant conifers (Protojuniperoxylon). These plants formed lowland forests along the banks of rivers. Herrerasaurus remains appear to have been the most common among the carnivores of the Ischigualasto Formation.

Herrerasaurus lived in these jungles alongside a smaller dinosaur, the one metre long Eoraptor, as well as Saurosuchus, a huge quadrupedal Archosaur. There were also a number of therapsid and reptilian herbivores. The dinosaurs had not yet taken control of the land environments as they did later.

All content from Kiddle encyclopedia articles (including the article images and facts) can be freely used under Attribution-ShareAlike license, unless stated otherwise. Cite this article:
Herrerasaurus Facts for Kids. Kiddle Encyclopedia.