Synapsids ('fused arch'), is a taxonomic class of tetrapods. This class includes mammals and earlier groups related to mammals. Synapsids are one of the two major groups of amniotes. The sister group, which gave rise to the reptiles, is the Sauropsida. Both groups evolved from early amniotes about 345 million years ago during the early or mid Carboniferous period.

Synapsids include the Pelycosauria (Pennsylvanian to Permian), and the Therapsida (Lower Permian to present).

The therapsids ('beast face') used to be called mammal-like reptiles. This was a mistake, because they were never reptiles. The split between Synapsids and Sauropsids (the group which gave rise to reptiles) took place long before therapsids evolved.

There are a number of characteristics which cannot be seen on fossils, but which are of great importance. Mammals are distinguished from reptiles by fundamental differences in the development of the blood system. These differences are such that it would be almost impossible for mammals to be derived from reptiles.

" It is clearly quite impossible for the condition found in birds and modern reptiles to have arisen from that found in mammals or vice versa". Kermack.6

This supports the division of amniotes into sauropsida and synapsida.

The synapsids have a single hole behind each eye, on the lower part of the skull.

Synapsids evolved a fenestra (hole) behind each eye orbit on the lower part of the skull. It allows better attachment sites for jaw muscles than the original anapsid condition.

A parallel development took place in the diapsida, who evolved two rather than one opening behind each eye.

Originally, the opening in the skull left the inner cranium only covered by the jaw muscles, but in higher therapsids and mammals the sphenoid bone has expanded to close the opening.

Synapsids had differentiated teeth. These include the canines, molars, and incisors.

The trend towards differentiation is found in some labyrinthodonts and early anapsid reptilians. They have enlarged first teeth on the maxilla, forming a form of proto-canines. This trait was subsequently lost in the sauropsid line, but developed further in the synapsids. Early synapsids could have 2 or even 3 enlarged 'canines', but in the therapsids, the pattern had settled to one canine in each upper jaw half. The lower canines developed later. 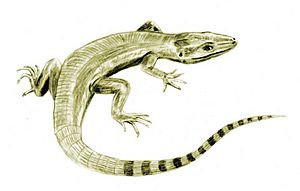 Archaeothyris, one of the oldest synapsids found.

Archaeothyris and Clepsydrops, the earliest known synapsids, lived in the Pennsylvanian subperiod (323-299 Mya) of the Carboniferous period and belonged to the series of primitive synapsids which are conventionally grouped as pelycosaurs. The pelycosaurs spread and diversified, becoming the largest terrestrial animals in the latest Carboniferous and Early Permian periods, ranging up to 6 metres (20 ft) in length. They were sprawling, bulky, possibly cold-blooded, and had small brains. Some, such as Dimetrodon, had large sails that might have helped raise their body temperature. A few relict groups lasted into the later Permian but, by the middle of the Late Permian, all of the pelycosaurs had either died off or evolved into their successors, the therapsids. 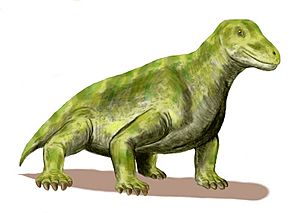 Moschops was a tapinocephalian from the Middle Permian of South Africa.

The therapsids, a more advanced group of synapsids, appeared during the Middle Permian and included the largest terrestrial animals in the Middle and Late Permian. They included herbivores and carnivores, ranging from small animals the size of a rat (e.g.: Robertia), to large, bulky herbivores a ton or more in weight (e.g.: Moschops). After flourishing for many millions of years, these successful animals were all but wiped out by the Permian-Triassic mass extinction about 250 mya, the largest known extinction in Earth's history, possibly related to the Siberian Traps volcanic event. 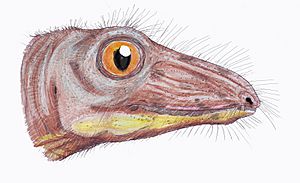 Nikkasaurus was an enigmatic synapsid from the Middle Permian of Russia. 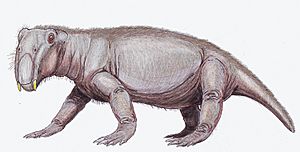 Lystrosaurus was the most common synapsid shortly after the Permian–Triassic extinction event.

Only a few therapsids went on to be successful in the new early Triassic landscape; they include Lystrosaurus and Cynognathus, the latter of which appeared later in the early Triassic. Now, however, they were accompanied by the early archosaurs (soon to give rise to the dinosaurs). Some of these, such as Euparkeria, were small and lightly built, while others, such as Erythrosuchus, were as big as or bigger than the largest therapsids.

After the Permian extinction, the synapsids did not count more than three surviving clades. The first comprised the therocephalians, which only lasted the first 20 million years of the Triassic period. The second were specialised, beaked herbivores known as dicynodonts (such as the Kannemeyeriidae), which contained some members that reached large size (up to a tonne or more). And finally there were the increasingly mammal-like carnivorous, herbivorous, and insectivorous cynodonts, including the eucynodonts from the Olenekian age, an early representative of which was Cynognathus.

Cynognathus was the largest predatory cynodont of the Triassic.

Unlike the dicynodonts, which were large, the cynodonts became progressively smaller and more mammal-like as the Triassic progressed, though some forms like Trucidocynodon remained large. The first mammaliaforms evolved from the cynodonts during the early Norian age of the Late Triassic, about 225 mya.

During the evolutionary succession from early therapsid to cynodont to eucynodont to mammal, the main lower jaw bone, the dentary, replaced the adjacent bones. Thus, the lower jaw gradually became just one large bone, with several of the smaller jaw bones migrating into the inner ear and allowing sophisticated hearing. 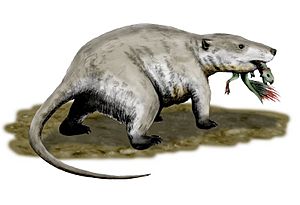 Repenomamus was the largest mammal of the Mesozoic.

Whether through climate change, vegetation change, ecological competition, or a combination of factors, most of the remaining large cynodonts (belonging to the Traversodontidae) and dicynodonts (of the family Kannemeyeriidae) had disappeared by the Rhaetian age, even before the Triassic-Jurassic extinction event that killed off most of the large nondinosaurian archosaurs. The remaining Mesozoic synapsids were small, ranging from the size of a shrew to the badger-like mammal Repenomamus.

Tritylodon was a cynodont that lived in Early Jurassic.

During the Jurassic and Cretaceous, the remaining nonmammalian cynodonts were small, such as Tritylodon. No cynodont grew larger than a cat. Most Jurassic and Cretaceous cynodonts were herbivorous, though some were carnivorous. The family Tritheledontidae, that first appeared near the end of the Triassic, was carnivorous and persisted well into the Middle Jurassic. The other, Tritylodontidae, first appeared at the same time as the tritheledonts, but was herbivorous. This group became extinct at the end of the Early Cretaceous epoch. Dicynodonts are thought to have become extinct near the end of the Triassic period, but there is evidence this group survived. New fossil finds have been found in the Cretaceous rocks of Gondwana.

Today, the 5,500 species of living synapsids, known as the mammals, include both aquatic (whales) and flying (bats) species, and the largest animal ever known to have existed (the blue whale). Humans are synapsids, as well. Most mammals are viviparous and give birth to live young rather than laying eggs with the exception being the monotremes.

Triassic and Jurassic ancestors of living mammals, along with their close relatives, had high metabolic rates. This meant consuming food (generally thought to be insects) in much greater quantity. To facilitate rapid digestion, these synapsids evolved mastication (chewing) and specialized teeth that aided chewing. Limbs also evolved to move under the body instead of to the side, allowing them to breathe more efficiently during locomotion. This helped make it possible to support their higher metabolic demands.

All content from Kiddle encyclopedia articles (including the article images and facts) can be freely used under Attribution-ShareAlike license, unless stated otherwise. Cite this article:
Synapsid Facts for Kids. Kiddle Encyclopedia.