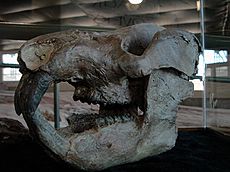 Cast of the skull of Kayentatherium. It had a skull about 10cm (4 inches) in length.

The Cynodonts are a sub-order of the Therapsida. Cynodonts, one of the most diverse groups of therapsids, are named after their dog-like teeth.

The taxon is a clade which includes modern mammals and their extinct close relatives, the Mammaliaformes.

The cynodonts lived in all continents, and their fossil record begins in the Upper Permian 256 million years ago.

The extinct members of the group were victims of the End-Triassic extinction event, but the line that led to the mammals survived.

All content from Kiddle encyclopedia articles (including the article images and facts) can be freely used under Attribution-ShareAlike license, unless stated otherwise. Cite this article:
Cynodont Facts for Kids. Kiddle Encyclopedia.