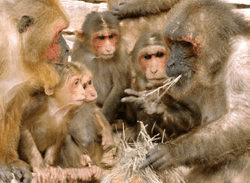 Chewing or mastication is the process by which food is crushed and ground by teeth. It is the first step of digestion, and it increases the surface area of foods to allow a more efficient break down by enzymes. During the mastication process, the food is positioned by the cheek and tongue between the teeth for grinding. The muscles of mastication move the jaws to bring the teeth into intermittent contact, repeatedly occluding and opening. As chewing continues, the food is made softer and warmer, and the enzymes in saliva begin to break down carbohydrates in the food. After chewing, the food (now called a bolus) is swallowed. It enters the esophagus and via peristalsis continues on to the stomach, where the next step of digestion occurs.

Premastication is sometimes performed by human parents for infants who are unable to do so for themselves. The food is masticated in the mouth of the parent into a bolus and then transferred to the infant for consumption. (Some other animals also premasticate.)

Cattle and some other animals, called ruminants, chew food more than once to extract more nutrients. After the first round of chewing, this food is called cud.

Chewing is primarily an unconscious (semi-autonomic) act, but can be mediated by higher conscious input. The motor program for mastication is a hypothesized central nervous system function by which the complex patterns governing mastication are created and controlled.

It is thought that feedback from proprioceptive nerves in teeth and the temporomandibular joints govern the creation of neural pathways, which in turn determine duration and force of individual muscle activation (and in some cases muscle fiber groups as in the masseter and temporalis).

This motor program continuously adapts to changes in food type or occlusion. This adaptation is a learned skill that may sometimes require relearning to adapt to loss of teeth or to dental appliances such as dentures.

It is thought that conscious mediation is important in the limitation of parafunctional habits as most commonly, the motor program can be excessively engaged during periods of sleep and times of stress. It is also theorized that excessive input to the motor program from myofascial pain or occlusal imbalance can contribute to parafunctional habits.

A study found that unchewed meat and vegetables were not digested, while tallow, cheese, fish, eggs, and grains did not need to be chewed. Chewing stimulates saliva production and increases sensory perception of the food being eaten, controlling when the food is swallowed. Avoiding chewing, by choice or due to medical reasons as tooth loss, is known as a soft diet. Such a diet may lead to inadequate nutrition due to a reduction in fruit and vegetable intake.

Chewing also stimulates the hippocampus and is necessary to maintain its normal function.

Chewing is largely an adaptation for mammalian herbivory. Carnivores generally chew very little or swallow their food whole or in chunks. This act of gulping food (or medicine pills) without chewing has inspired the English idiom "wolfing it down".

Ornithopods, a group of dinosaurs including the Hadrosaurids ("duck-bills"), developed teeth analogous to mammalian molars and incisors during the Cretaceous period; this advanced, cow-like dentition allowed the creatures to obtain more nutrients from the tough plant life. This may have given them the advantage needed to usurp the formidable sauropods, who depended on gastroliths for grinding food, from their ecological niches. They eventually became some of the most successful animals on the planet until the Cretaceous–Paleogene extinction event wiped them out. 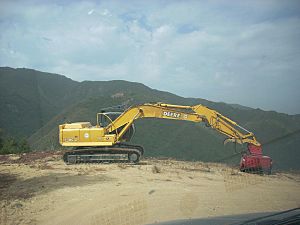 Masticator on the Zaca Fire

The process of chewing has, by analogy, been applied to machinery. The U.S. Forest Service uses a machine called a masticator (also called a forestry mulching machine) to "chew" through brush and timber in order to clear firelines in advance of a wildfire.

All content from Kiddle encyclopedia articles (including the article images and facts) can be freely used under Attribution-ShareAlike license, unless stated otherwise. Cite this article:
Chewing Facts for Kids. Kiddle Encyclopedia.