For the small fish, go to seahorse 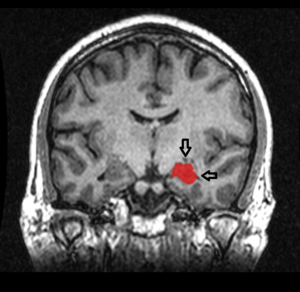 MRI coronal view of a hippocampus shown in red

In Alzheimer's disease, the hippocampus is one of the first regions of the brain to suffer damage; memory loss and disorientation are included among the early symptoms. People with extensive, bilateral hippocampal damage may experience anterograde amnesia – the inability to form or retain new memories.

The different neuronal cell types are neatly organized into layers in the hippocampus. It has often been used as a model system for studying neurophysiology. Long-term potentiation (LTP), a neural mechanism for storing memory, was first discovered to occur in the hippocampus.

The connection of hippocampus with memory was made by a famous report. This gave the results of the destruction of the hippocampi by surgery (an attempt to relieve epileptic seizures). The unexpected outcome of the surgery was severe anterograde and partial retrograde amnesia. The patient could not form new memories of events after his surgery, and could not remember any events that occurred just before his surgery. However, he did remember events from many years earlier, right back to his childhood.

This case attracted widespread professional interest. Later, other patients with similar damage and amnesia (caused by accident or disease) have also been studied. Thousands of experiments have studied the physiology of changes in synaptic connections in the hippocampus after activity. The hippocampi do play an important role in memory. However, the precise nature of this role remains unclear.

Recent reviews say how the hippocampus puts together our memories of past events, and helps us remember aspects of complex events.

Neurons in the rat hippocampus show activity related to the rat's position in its environment. As with the memory theory, there is now almost universal agreement that spatial coding plays an important role in hippocampal function, but the details are widely debated.

Studies conducted on freely moving rats and mice have shown that many hippocampal neurons have "place fields", that is, they fire bursts of action potentials when a rat passes through a particular part of the environment. In humans, cells with location-specific firing patterns have been reported in a study. Patients with drug-resistant epilepsy had diagnostic electrodes put in their hippocampus. Then a computer was used to move them around in a virtual reality town.

The discovery of place cells in the 1970s led to a theory that the hippocampus might act as a cognitive map –a neural representation of the layout of the environment. The "cognitive map hypothesis" has been further advanced by recent discoveries of direction cells in several parts of the rodent brain which are strongly connected to the hippocampus. 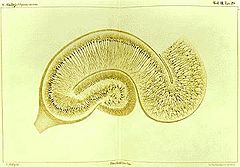 The hippocampus has a generally similar appearance across the mammals from monotremes such as the echidna to primates such as humans. The hippocampal size to body-size ratio increases: it is about twice as large for primates as for the echidna. It does not, however, increase at anywhere close to the rate of the neocortex to body-size ratio. Therefore, the hippocampus takes up a larger fraction of the cortex in rodents than in primates.

Other vertebrates have areas which may be homologous to the hippocampus of mammals. Some insects, and cephalopods such as the octopus, have strong spatial learning and navigation abilities. These appear to work differently from the mammalian spatial system, and have evolved independently of the mammalian system.

All content from Kiddle encyclopedia articles (including the article images and facts) can be freely used under Attribution-ShareAlike license, unless stated otherwise. Cite this article:
Hippocampus Facts for Kids. Kiddle Encyclopedia.