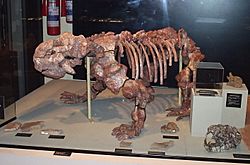 Dinodontosaurus, one of few genera of dicynodonts that survived the Permian-Triassic extinction event. It was 8 ft (2.4 m) long, one of the largest herbivores of its time.

The Dicynodontia are a group of therapsids. They were small to large herbivorous animals with two tusks, hence their name, which means 'two dog tooth'. They are also the most successful and diverse of the non-mammalian therapsids, with over 70 genera known.

All of them had the same basic body plan. They were built like small tanks, with sturdy legs at each corner. They were not fast movers, but were obviously strong and lived in groups rather as many herbivores do today. Their body shape was similar to certain types of modern mammals such as pigs and rhinoceros.

The dicynodonts were a group of therapsids, but were not ancestors to the mammals. The group which evolved into mammals was the cynodonts. 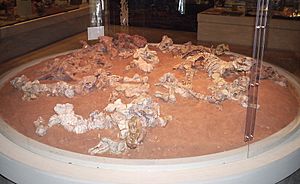 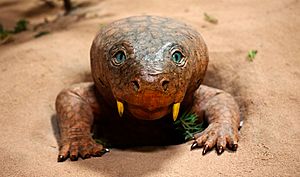 The dicynodont skull is highly specialised, light but strong, with the synapsid temporal openings at the rear of the skull greatly enlarged to accommodate larger jaw muscles. The front of the skull and the lower jaw are generally narrow and, in all but a number of primitive forms, toothless. Instead, the front of the mouth is equipped with a horny beak, as in turtles and ceratopsian dinosaurs. Food was processed by the retraction of the lower jaw when the mouth closed, producing a powerful shearing action, which would have enabled dicynodonts to cope with tough plant material. Many genera also have a pair of tusks, which it is thought may have been an example of sexual dimorphism.

The body is short, strong and barrel-shaped, with strong limbs. In large genera (such as Dinodontosaurus) the hindlimbs were held erect, but the forelimbs bent at the elbow. Both the pectoral girdle and the ilium are large and strong. The tail is short.

Dicynodonts have long been suspected of being warm-blooded animals. Their bones are highly vascularised, possess Haversian canals and their bodily proportions are conductive to heat preservation. In young specimens, the bones are so highly vascularised that they exhibit higher channel densities than most other therapsids. Yet, studies on Late Triassic dicynodont coprolites paradoxically showcase digestive patterns more typical of animals with slow metabolisms. 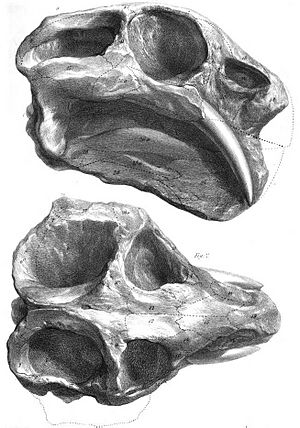 An illustration of the skull of Dicynodon lacerticeps, first published in an 1845 description by Richard Owen.

Dicynodonts have been known since the mid-1800s. The South African geologist Andrew Geddes Bain gave the first description of dicynodonts in 1845. At the time, Bain was a supervisor for the construction of military roads under the Corps of Royal Engineers and had found many reptilian fossils during his surveys of South Africa. Bain described these fossils in an 1845 letter published in Transactions of the Geological Society of London, calling them "bidentals" for their two prominent tusks. In that same year, the English paleontologist Richard Owen named two species of dicynodonts from South Africa: Dicynodon lacerticeps and Dicynodon bainii. Since Bain was preoccupied with the Corps of Royal Engineers, he wanted Owen to describe his fossils more extensively. Owen did not publish a description until 1876 in his Descriptive and Illustrated Catalogue of the Fossil Reptilia of South Africa in the Collection of the British Museum. By this time, many more dicynodonts had been described. In 1859, another important species called Ptychognathus declivis was named from South Africa. A year later, in 1860, Owen named the group Dicynodontia. In his Descriptive and Illustrated Catalogue, Owen honored Bain by erecting Bidentalia as a replacement name for his Dicynodontia. The name Bidentalia quickly fell out of use in the following years, replaced by popularity of Owen's Dicynodontia.

Eodicynodon, a primitive dicynodont from the middle Permian of South Africa

Dicynodonts first appear during Middle Permian, and underwent a rapid evolutionary radiation, becoming the most successful and abundant land vertebrates of the Late Permian. During this time, they included a large variety of ecotypes, including large, medium-sized, and small herbivores and short-limbed mole-like burrowers.

Only four lineages are known to have survived the end of Permian extinction; the first three represented with a single genus each; Myosaurus, Kombuisia and Lystrosaurus, the latter being the most common and widespread herbivores of the Induan (earliest Triassic). None of these survived long into the Triassic. The fourth group was the Kannemeyeriiformes, the only dicynodonts who diversified during the Triassic. These stocky, pig- to ox-sized animals were the most abundant herbivores worldwide from the Olenekian to the Ladinian age. By the Carnian they had been supplanted by traversodont cynodonts and rhynchosaur reptiles. During the Norian (middle of the Late Triassic), perhaps due to increasing aridity, they drastically declined, and the role of large herbivores was taken over by sauropodomorph dinosaurs.

Fossils discovered in Poland indicate that dicynodonts survived at least until the early Rhaetian (latest Triassic). Six fragments of fossil bone interpreted as remains of a skull discovered in Australia (Queensland) might indicate that dicynodonts survived into the Cretaceous in southern Gondwana. However, Agnolin et al. (2010) considered the affinities of the specimen from Australia to be uncertain, and noted its similarity to the skull bones of some baurusuchian crocodyliforms, such as Baurusuchus pachecoi.

With the decline and extinction of the kannemeyerids, there were to be no more dominant large synapsid herbivores until the middle Paleocene epoch (60 Ma) when mammals, descendants of cynodonts, began to diversify after the extinction of the dinosaurs.

All content from Kiddle encyclopedia articles (including the article images and facts) can be freely used under Attribution-ShareAlike license, unless stated otherwise. Cite this article:
Dicynodont Facts for Kids. Kiddle Encyclopedia.