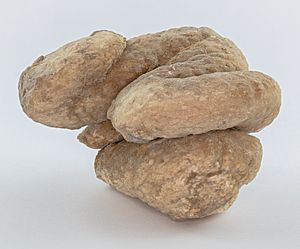 A coprolite is fossilized faeces. Coprolites are trace fossils, not body fossils. They give evidence of the animal's behaviour (in this case, its diet).

The name is taken from the Greek words κόπρος (kopros, meaning "dung") and λίθος (lithos, meaning "stone"). They were first described by William Buckland in 1829.

All content from Kiddle encyclopedia articles (including the article images and facts) can be freely used under Attribution-ShareAlike license, unless stated otherwise. Cite this article:
Coprolite Facts for Kids. Kiddle Encyclopedia.