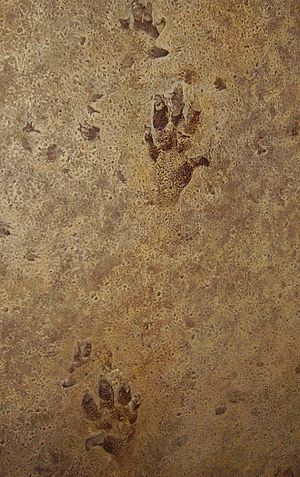 Footprints in a Triassic sandstone, given the name Chirotherium 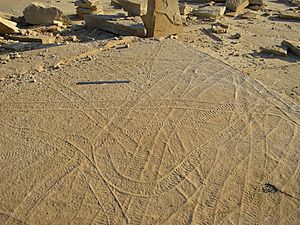 Trace fossils (or ichnofossils) are geological records of biological activity. They are fossils, but not of the living things themselves. Probably the best-known examples are dinosaur trackways.

Trace fossils may be impressions made on the substrate by an organism. Burrows, borings, footprints, feeding marks, and root cavities are examples. The term includes the remains of other organic material produced by an organism – for example coprolites (fossilized droppings) or chemical markers. Stromatolites are sediment structures produced by bacteria. Trace fossils contrast with body fossils, which are the fossilized remains of parts of organisms' bodies, usually altered by later chemical activity or mineralization.

Structures which are not produced by the behaviour of an organism are not considered trace fossils.

The study of traces is called ichnology. Traces reflect the behaviour, not usually not the biological affinity of their makers. They are given their own names in taxonomy, based on their appearance and the implied behaviour of their makers.

All content from Kiddle encyclopedia articles (including the article images and facts) can be freely used under Attribution-ShareAlike license, unless stated otherwise. Cite this article:
Trace fossil Facts for Kids. Kiddle Encyclopedia.