Hot Springs (Lakota: mni kȟáta; "hot water") is a city in and county seat of Fall River County, South Dakota, United States. As of the 2020 census, the city population was 3,395. In addition, neighboring Oglala Lakota County contracts the duties of Auditor, Treasurer and Register of Deeds to the Fall River County authority in Hot Springs. 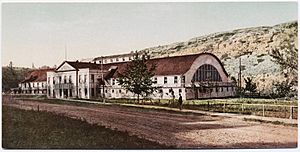 Hot Springs is one of the warmest places in South Dakota, with an annual mean temperature of 48.6 °F (9.2 °C). Some of the attractions in the Hot Springs area are the Mammoth Site of Hot Springs and Evans Plunge, built in 1890, with its naturally warm 87 °F (31 °C) spring water. The town is a gateway to the attractions of the southern Black Hills, particularly Wind Cave National Park. Hot Springs holds the annual Miss South Dakota pageant. In recognition of its historic value, the National Trust for Historic Preservation listed Hot Springs as one of its 2009 Dozen Distinctive Destinations.

The city center contains over 35 sandstone buildings. Hot Springs is also the home of a United States Department of Veterans Affairs hospital (Black Hills Healthcare System - Hot Springs Campus), which was designated in 2011 as a National Historic Landmark. Formerly known as the Battle Mountain Sanitarium, the 100-bed center was built in 1907 for patients suffering from rheumatism or tuberculosis. In the early 21st century, it offers extensive outpatient treatment, acute hospital care, PTSD treatment, and an alcohol and drug treatment facility.

The Battle Mountain Sanitarium was declared a National Treasure by the National Trust for Historic Preservation following a December 2011 proposal announced by the Department of Veterans Affairs to close the facility. Community and state leaders, including Senator Tim Johnson, Senator John Thune, and Representative Kristi Noem, opposed the closing. A concerned group of veterans and citizens organized a "Save the VA" Campaign; they have countered the VA's proposal based on the results of multiple Freedom of Information Act requests, getting as far as meeting with Secretary of Veterans Affairs Eric Shinseki to show how they believe VA leadership manipulated data to justify the proposed closure of the Landmark. After Veterans Health Administration scandal of 2014, Hot Springs was visited by members of the United States House Committee on Veterans' Affairs for a Congressional field hearing regarding the proposed closure and the committee heard testimony from members of Save the VA Committee and others opposed to the closure as well as two VA administrators in favor of the closure.

The Sioux and Cheyenne people had long frequented the area, appreciating its warm springs. According to several accounts, including a ledger art piece by the Oglala Lakota artist Amos Bad Heart Bull, Native Americans considered the springs sacred. European settlers arrived in the second half of the 19th century. They first named this city as Minnekahta; it was renamed in 1882. The present name is a translation of the Native American name. A variety of health resorts were built on the basis of the springs.

According to the United States Census Bureau, the city has a total area of 3.61 square miles (9.35 km2), all of it land. 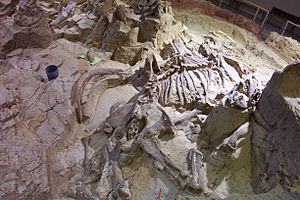 All content from Kiddle encyclopedia articles (including the article images and facts) can be freely used under Attribution-ShareAlike license, unless stated otherwise. Cite this article:
Hot Springs, South Dakota Facts for Kids. Kiddle Encyclopedia.