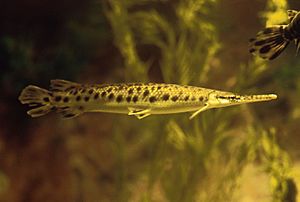 Gars (or garpike) are a type of ray-finned fish. Gars have long bodies that are heavily armored with scales, and fronted by similarly long jaws filled with long, sharp teeth. All of the gars are relatively large fish. The alligator gar is the largest. Some specimens have been reported to be 3 metres (9.8 ft) in length. However, they typically grow to 2 metres (6.6 ft) and weigh over 45 kilograms (99 lb). Unusually, their swim bladders can function as lungs. Most gars surface once in while to take a gulp of air. Gar flesh is edible and the hard skin and scales of gars are used by humans. However, their eggs are highly toxic.

All content from Kiddle encyclopedia articles (including the article images and facts) can be freely used under Attribution-ShareAlike license, unless stated otherwise. Cite this article:
Gar Facts for Kids. Kiddle Encyclopedia.