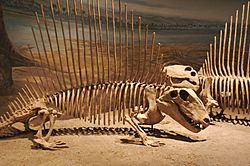 Another species, showing the skull openings typical of a synapsid

Dimetrodon was a pelycosaur (early Synapsida) from the first part of the Permian period (about 295–272 million years ago).

Dimetrodon walked on four legs and had a tall, curved skull with large teeth of different sizes set along the jaws. Most fossils have been found in the southwestern United States, from red beds in Texas and Oklahoma. The largest known species of Dimetrodon is D. angelensis at 4.6 metres (15 ft) and the smallest is D. teutonis at 60 centimetres (24 in).

Dimetrodon was a carnivore, probably the top predator in its environment. Its main feature is the large sail on its back formed by elongated spines extending upwards from the vertebrae. The spines would be joined by skin. The general opinion of palaeontologists is that it was a temperature-regulating device. The idea is that the animal could warm up in the early morning by placing itself broadside to the Sun, and later could cool off in the shade, or arrange for its body to get less sunlight. At this stage in evolution, no land animals were homoiotherms. Very likely the sail was also used for sexual or territorial signalling. In which case, the skin would be coloured. This, of course, is supposition, but it does make sense of the animal's most extraordinary feature.

In evolutionary terms, Dimetrodon was a synapsid, a line of land animals which eventually gave rise to the mammals. It was not on the direct line of descent, but a good example of the evolutionary grade typical of Permian synapsids. 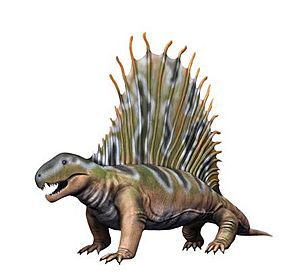 Dimetrodon was a quadrupedal, sail-backed synapsid. Most Dimetrodon species ranged in length from 1.7 to 4.6 metres (5.6 to 15.1 ft) and are estimated to have weighed between 28 and 250 kilograms (62 and 551 lb). The largest known species of Dimetrodon is D. angelensis at 4.6 metres (15 ft) and the smallest is D. teutonis at 60 centimetres (24 in). The larger species of Dimetrodon were among the largest predators of the Early Permian, although the closely related Tappenosaurus, known from skeletal fragments in slightly younger rocks, may have been even larger at an estimated 18 feet (5.5 m) in total body length. Although some Dimetrodon species could grow very large, many juvenile specimens are known.

A single large opening on either side of the back of the skull links Dimetrodon with mammals and distinguishes it from most of the earliest sauropsids, which either lack openings or have two openings. Features such as ridges on the inside of the nasal cavity and a ridge at the back of the lower jaw are thought to be part of an evolutionary progression from early tetrapods (four-limbed vertebrates) to mammals.

The skull of Dimetrodon is tall and compressed laterally, or side-to-side. The eye sockets are positioned high and far back in the skull. Behind each eye socket is a single hole called an infratemporal fenestra. An additional hole in the skull, the supratemporal fenestra, can be seen when viewed from above. The back of the skull (the occiput) is oriented at a slight upward angle, a feature that it shares with all other early synapsids. The upper margin of the skull slopes downward in a convex arc to the tip of the snout. The tip of the upper jaw, formed by the premaxilla bone, is raised above the part of the jaw formed by the maxilla bone to form a maxillary "step." Within this step is a diastema, or gap in the tooth row. Its skull was more heavily built than a dinosaur's. 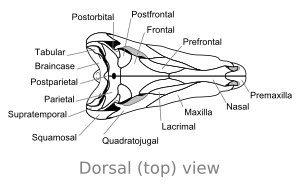 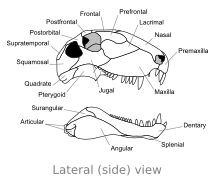 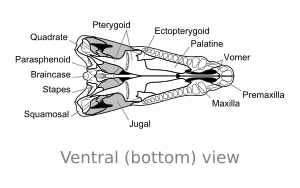 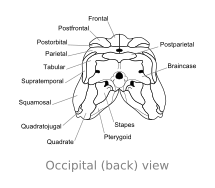 Bones of the skull of Dimetrodon 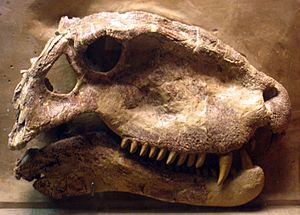 A skull of D. grandis

The size of the teeth varies greatly along the length of the jaws, lending Dimetrodon its name, which means "two measures of tooth" in reference to sets of small and large teeth. One or two pairs of caniniforms (large pointed canine-like teeth) extend from the maxilla. Large incisor teeth are also present at the tips of the upper and lower jaws, rooted in the premaxillae and dentary bones. Small teeth are present around the maxillary "step" and behind the caniniforms, becoming smaller further back in the jaw.

Many teeth are widest at their midsections and narrow closer to the jaws, giving them the appearance of a teardrop. Teardrop-shaped teeth are unique to Dimetrodon and other closely related sphenacodontids, and help distinguish them from other early synapsids. As in many other early synapsids, the teeth of most Dimetrodon species are serrated at their edges. The serrations of Dimetrodon teeth were so fine that they resembled tiny cracks. The dinosaur Albertosaurus had similarly crack-like serrations, but, at the base of each serration was a round void, which would have functioned to distribute force over a larger surface area and prevent the stresses of feeding from causing the crack to spread through the tooth. Unlike Albertosaurus, Dimetrodon teeth lacked adaptations that would stop cracks from forming at their serrations. The teeth of D. teutonis lack serrations, but still have sharp edges.

On the inner surface of the nasal section of skull are ridges called nasoturbinals, which may have supported cartilage that increased the area of the olfactory epithelium, the layer of tissue that detects odors. These ridges are much smaller than those of later synapsids from the Late Permian and Triassic, whose large nasoturbinals are taken as evidence for warm-bloodedness because they may have supported mucous membranes that warmed and moistened incoming air. Thus, the nasal cavity of Dimetrodon is transitional between those of early land vertebrates and mammals. 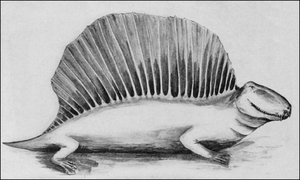 An outdated restoration of Dimetrodon from 1908 showing a short tail, made before the discovery of skeletons with complete tails. 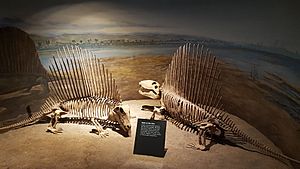 The sail of Dimetrodon is formed by elongated neural spines projecting from the vertebrae. Each spine varies in cross-sectional shape from its base to its tip in what is known as "dimetrodont" differentiation. Near the vertebra body, the spine cross section is laterally compressed into a rectangular shape, and closer to the tip, it takes on a figure-eight shape as a groove runs along either side of the spine. The figure-eight shape is thought to reinforce the spine, preventing bending and fractures. A cross section of the spine of one specimen of Dimetrodon giganhomogenes is rectangular in shape but preserves figure-eight shaped rings close to its center, indicating that the shape of spines may change as individuals age. The microscopic anatomy of each spine varies from base to tip, indicating where it was embedded in the muscles of the back and where it was exposed as part of a sail. The lower or proximal portion of the spine has a rough surface that would have served as an anchoring point for the epaxial muscles of the back, and also has a network of connective tissues called Sharpey's fibers that indicate it was embedded within the body. Higher up on the distal (outer) portion of the spine, the bone surface is smoother. The periosteum, a layer of tissue surrounding the bone, is covered in small grooves that presumably supported the blood vessels that vascularized the sail.

The large groove that runs the length of the spine was once thought to be a channel for blood vessels, but since the bone does not contain vascular canals, the sail is not thought to have been as highly vascularized as once thought. Some specimens of Dimetrodon preserve deformed areas of the neural spines that appear to be healed-over fractures. The cortical bone that grew over these breaks is highly vascularized, suggesting that soft tissue must have been present on the sail to supply the site with blood vessels. Layered lamellar bone makes up most of the neural spine's cross-sectional area, and contains lines of arrested growth that can be used to determine the age of each individual at death. In many specimens of D. gigashomogenes the distal portions of spines bend sharply, indicating that the sail would have had an irregular profile in life. Their crookedness suggests that soft tissue may not have extended all the way to the tips of the spines, meaning that the sail's webbing may not have been as extensive as it is commonly imagined.

No fossil evidence of Dimetrodon's skin has yet been found. Impressions of the skin of a related animal, Estemmenosuchus, indicate that it would have been smooth and well-provided with glands. Dimetrodon also may have had large scutes on the underside of its tail and belly, as other synapsids did. 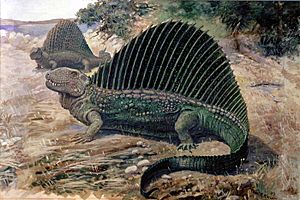 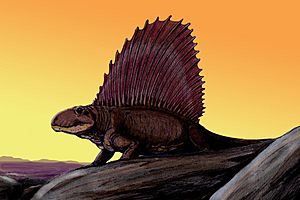 D. grandis warming up at sunrise

Paleontologists have proposed many ways in which the sail could have functioned in life. Some of the first to think about its purpose suggested that the sail may have served as camouflage among reeds while Dimetrodon waited for prey, or as an actual boat-like sail to catch the wind while the animal was in the water. Another is that the long neural spines could have stabilized the trunk by restricting up-and-down movement, which would allow for a more efficient side-to-side movement while walking. 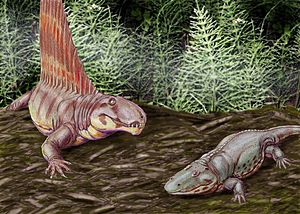 Restoration of D. grandis and the temnospondyl amphibian Eryops, both found in the Red Beds of Texas

Olson made many inferences on the paleoecology of the Texas Red beds and the role of Dimetrodon within its ecosystem. He proposed several main types of ecosystems in which the earliest tetrapods lived. Dimetrodon belonged to the most primitive ecosystem, which developed from aquatic food webs. In it, aquatic plants were the primary producers and were largely fed upon by fish and aquatic invertebrates. Most land vertebrates fed on these aquatic primary consumers. Dimetrodon was probably the top predator of the Red Beds ecosystem, feeding on a variety of organisms such as the large shark Xenacanthus, the aquatic amphibians Trimerorhachis and Diplocaulus, and the terrestrial tetrapods Seymouria and Trematops. Insects are known from the Early Permian Red Beds and were probably involved to some degree in the same food web as Dimetrodon, feeding small reptiles like Captorhinus. The Red Beds assemblage also included some of the first large land-living herbivores like Edaphosaurus and Diadectes. Feeding primarily on terrestrial plants, these herbivores did not derive their energy from aquatic food webs. According to Olson, the best modern analogue for the ecosystem Dimetrodon inhabited is the Everglades. The exact lifestyle of Dimetrodon (amphibious to terrestrial) has long been controversial, but bone microanatomy supports a terrestrial lifestyle, which implies that it would have fed mostly on land, on the banks, or in very shallow water. Evidence also exists for Dimetrodon preying on aestivating Diplocaulus during times of drought, with three partially eaten juvenile Diplocaulus in a burrow of eight bearing teeth marks from a Dimetrodon that unearthed and killed them.

The only species of Dimetrodon found outside the southwestern United States is D. teutonis from Germany. Its remains were found in the Tambach Formation in a fossil site called the Bromacker locality. The Bromacker's assemblage of Early Permian tetrapods is unusual in that there are few large-bodied synapsids serving the role of top predators. D. teutonis is estimated to have been only 1.7 metres (5.6 ft) in length, too small to prey on the large diadectid herbivores that are abundant in the Bromacker assemblage. It more likely ate small vertebrates and insects. Only three fossils can be attributed to large predators, and they are thought to have been either large varanopids or small sphenacodonts, both of which could potentially prey on D. teutonis. In contrast to the lowland deltaic Red Beds of Texas, the Bromacker deposits are thought to have represented an upland environment with no aquatic species. It is possible that large-bodied carnivores were not part of the Bromacker assemblage because they were dependent on large aquatic amphibians for food.

All content from Kiddle encyclopedia articles (including the article images and facts) can be freely used under Attribution-ShareAlike license, unless stated otherwise. Cite this article:
Dimetrodon Facts for Kids. Kiddle Encyclopedia.