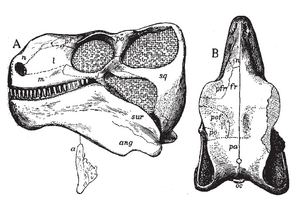 Skull of Edaphosaurus from the side and top

Edaphosaurus was a pelycosaur (early Synapsida) that lived during the later Carboniferous and early Permian. It was a herbivorous relative of the well-known Dimetrodon. Both had a large, thermal regulating sail on the back. Fossils of Edaphosaurus have been found in Europe and North America.

Edaphosaurus species measured from 0.5 metres (1.6 ft) to almost 3.5 metres (11.5 ft) in length and weighed over 300 kilograms (660 lb). It was slightly taller and stockier than Dimetrodon, but like its pelycosaur relatives had a small head and a long tail. 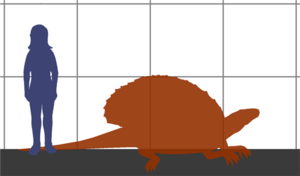 Edaphosaurus size, compared to a human.

Edaphosaurus species measured from 0.5 metres (1.6 ft) to almost 3.5 metres (11.5 ft) in length and weighed over 300 kilograms (660 lb). In keeping with the tiny head, the cervical vertebrae are reduced in length, while the dorsal vertebrae are massive, the tail is deep, the limbs are short and robust and the ribs form a wide ribcage. Like most herbivores, Edaphosaurus would have had a capacious gut and symbiotic bacteria to aid in the breakdown of cellulose and other indigestable plant material. Like its more famous relative Dimetrodon, Edaphosaurus had a sail-like fin that was supported by bones of the vertebral column. Edaphosaurus differs from Dimetrodon in having cross-bars on the spines that supported its fin.

Skull of Edaphosaurus in lateral and dorsal views

The head of Edaphosaurus was short, relatively broad, triangular in outline, and remarkably small compared to its body size. The deep lower jaw likely had powerful muscles and the marginal teeth along the front and sides of its jaws had serrated tips, helping Edaphosaurus to crop bite-sized pieces from tough terrestrial plants. Back parts of the roof of the mouth and the inside of the lower jaw held dense batteries of peglike teeth, forming a broad crushing and grinding surface on each side above and below. Its jaw movements were propalinal (front to back). Early descriptions suggested that Edaphosaurus fed on invertebrates such as mollusks, which it would have crushed with its tooth plates. However, paleontologists now think that Edaphosaurus ate plants, although tooth-on-tooth wear between its upper and lower tooth plates, indicates only "limited processing of food" compared to other early plant-eaters such as Diadectes, a large non-amniote reptiliomorph (Diadectidae) that lived at the same time. Early members of the Edaphosauridae such as Ianthasaurus lacked tooth plates and ate insects. 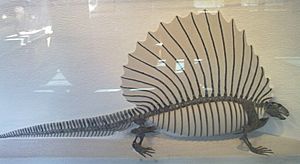 The sail along the back of Edaphosaurus was supported by hugely elongated neural spines from neck to lumbar region, connected by tissue in life. When compared with the sail of Dimetrodon, the vertebral spines are shorter and heavier, and bear numerous small crossbars. Edaphosaurus and other members of the Edaphosauridae evolved tall dorsal sails independently of sail-back members of the Sphenacodontidae such as Dimetrodon and Secodontosaurus that lived at the same time, an unusual example of parallel evolution. The function(s) of the sail in both groups is still debated. Researchers have suggested that such sails could have provided camouflage, wind-powered sailing over water, anchoring for extra muscle support and rigidity for the backbone, protection against predator attacks, fat storage areas, body temperature control surfaces, or sexual display and species recognition. The height of the sail, curvature of the spines, and shape of the crossbars are distinct in each of the described species of Edaphosaurus and show a trend for larger and more elaborate (but fewer) projecting processes over time. Romer and Price suggested that the projections on the spines of Edaphosaurus might have been embedded in tissue under the skin and might have supported food-storage or fat similar to the hump of a camel. Bennett argued that the bony projections on Edaphosaurus spines were exposed and could create air turbulence for more efficient cooling over the surface of the sail to regulate body temperature. Recent research that examined the microscopic bone structure of the tall neural spines in edaphosaurids has raised doubts about a thermoregulatory role for the sail and suggests a display function is more plausible. 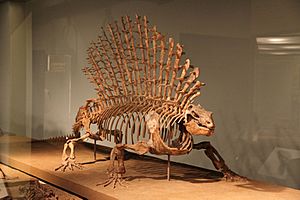 Edward Drinker Cope named and described Edaphosaurus ("pavement lizard") in 1882, based on a crushed skull and a left lower jaw from the Texas Red Beds. He noted in particular the "dense body of teeth" on both the upper and lower jaws, and used the term "dental pavement" in a table in his description. The type species name pogonias means "bearded" in Greek, referring to the enlarged inward sloping chin on the lower jaw. Cope classified Edaphosaurus as a member of his Pelycosauria and created the new family Edaphosauridae. The type material did not include any of the post-cranial skeleton apart from an axis vertebra and Cope was unaware of the animal’s large sail, a feature then known only for Dimetrodon.

In 1886, Cope erected the new genus Naosaurus "ship lizard" (from Greek naos "ship") for skeletal remains similar to those of the long-spined Dimetrodon but with distinctive "transverse processes or branches which resemble the yardarms of a ship's mast". He speculated that "the yardarms were connected by membranes with the neural spine or mast, thus serving the animal as a sail with which he navigated the waters of the Permian lakes". He recognized three species: Naosaurus claviger "club-bearer" (for the projections on its spines; now considered a synonym of Edaphosaurus pogonias); Naosaurus cruciger "cross-bearer" (for the projections on its spines; first described by Cope as Dimetrodon cruciger in 1878; now Edaphosaurus cruciger, the largest species in size); and Naosaurus microdus "small tooth" (first described as Edaphosaurus microdus in 1884). Cope noted some incomplete skull material found associated with the specimens of N. claviger and N. microdus, but thought Naosaurus was distinct from Edaphosaurus. He later decided that Naosaurus must have had a large carnivorous skull similar to Dimetrodon, although he had no direct fossil proof.

In 1907, the American paleontologist Ermine Cowles Case suggested that the skull of Edaphosaurus might belong with skeletons called Naosaurus, based on a specimen found in 1906 that appeared to associate elements of both. In 1913, Samuel Wendell Williston and Case described the new species Edaphosaurus novomexicanus from a fairly complete specimen unearthed in New Mexico in 1910, in which a sailbacked Naosaurus-type skeleton was found with a small Edaphosaurus-type skull. The older generic name Edaphosaurus Cope, 1882 became the valid one.

In 1940, paleontologists Alfred Sherwood Romer and Llewellyn Ivor Price named the new species Edaphosaurus boanerges ("thunderous orator")--an ironic reference to the remarkably small size of the holotype lower jaw on a composite skeleton originally mounted in the Museum of Comparative Zoology (Harvard University) with the head restored based on the larger species Edaphosaurus cruciger.

In 1979, paleontologist David Berman erected Edaphosaurus colohistion ("stunted sail") for an early species with a relatively small sail, based on fossils from West Virginia.

Other proposed species of Edaphosaurus have been based on more fragmentary material that cannot be rigorously diagnosed to a genus/species level, but which may nonetheless represent edaphosaurids. 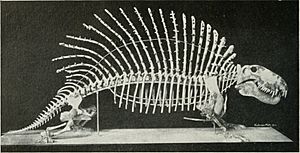 The Naosaurus skeletal mount, with wrongly-attributed Dimetrodon skull, as mounted in the AMNH in 1906-1907.

American paleoartist Charles R. Knight reconstructed Edaphosaurus (as "Naosaurus") with a Dimetrodon skull that Cope had previously referred to that genus in error. This painting was commissioned for the American Museum of Natural History in 1897 and was reprinted for Cope's obituary in the November 1898 issue of The Century Magazine. Knight later created a more accurate revised version of the painting that turned "Naosaurus" into Dimetrodon.

In 1907, a skeleton of "Naosaurus claviger" (a synonym of Edaphosaurus pogonias) was mounted in the American Museum of Natural History. This skeleton was a composite, including the skull of a Dimetrodon, as referred to the species by E.D. Cope. As "Naosaurus" was thought to be a close relative of Dimetrodon rather than Edaphosaurus, slender limbs probably belonging to Dimetrodon dollovianus were also mounted with this composite specimen, rather than the correct, stockier limbs. By the 1940s, this mounted skeleton had been updated to reflect more current knowledge of Edaphosaurus, with a skull based on that of E. cruciger.

Artist Rudolph Zallinger depicted Edaphosaurus alongside Dimetrodon and Sphenacodon to represent the Permian period in his famous The Age of Reptiles mural (1943-1947) at the Yale Peabody Museum. The mural was reproduced from a smaller version of the painting in The World We Live In series published in Life magazine in 1952 to 1954. The magazine series was edited into a popular book in 1955.

Edaphosaurus appears in episode 2 of the BBC documentary Walking with Monsters. A herd was attacked by a female Dimetrodon.

All content from Kiddle encyclopedia articles (including the article images and facts) can be freely used under Attribution-ShareAlike license, unless stated otherwise. Cite this article:
Edaphosaurus Facts for Kids. Kiddle Encyclopedia.