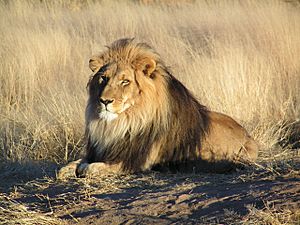 Apex predators are predators with no natural predators of their own. They are at the top of their food chain.

Apex predators have big effects on the animals and plants lower down the food chain. If they become extinct in an area, many changes happen. In recent times, it is often humans who have removed top predators.

An example of apex predators affecting an ecosystem is in Yellowstone National Park. After the gray wolf was reintroduced, in 1995, researchers noticed big changes occurring in the Greater Yellowstone Ecosystem. Elk, the primary prey of the gray wolf, became less abundant and changed their behavior. This freed the riparian (river) zones from constant grazing. This allowed willows, aspens, and cottonwoods to grow, so creating a habitat for beaver, moose, and scores of other species. In addition to the effects on prey species, the gray wolf's presence also affected the park's grizzly bear, a vulnerable species. The bears, emerging from hibernation, chose to scavenge off wolf kills after fasting for months. They can also eat wolf kills in autumn to prepare for hibernation. As grizzly bears give birth during hibernation, a greater food supply may improve the mother’s nutrition and increase the number of cubs. Dozens of other species, including eagles, ravens, magpies, coyotes, and black bears, have been seen scavenging from wolf kills.

All content from Kiddle encyclopedia articles (including the article images and facts) can be freely used under Attribution-ShareAlike license, unless stated otherwise. Cite this article:
Apex predator Facts for Kids. Kiddle Encyclopedia.