The wild boar (Sus scrofa) belongs to the family of the real pig (Suidae) from the order of artiodactyls. They live today in almost every part of the world, even many countries that are not their natural habitats.

Wild boars are omnivorous and easily adapt to changes. They were hunted in Europe from long ago for many of their body parts, and were shown in the mythology of many ancient civilizations. Greek, Phoenician, and Persian mythology showed them as fierce, sometimes evil, while others showed them as brave, powerful animals. Again, others saw them as parasitic. Even today many people see wild boars very differently.

The hair of the boar was often used when making the toothbrush until the 1930s. The hair for the bristles usually came from the neck area of the boar. The brushes were popular because the bristles were soft. However, this was not the best material for oral hygiene because the hairs dried slowly and usually held bacteria.

The body of the wild boar, when seen from the side, often looks very big. This impression is partly because, compared to the large body mass, the legs of the wild boar are short and do not look very strong. The wild boar's head is very large. Its eyes are high up on the head, while the ears are small with bristles around it. Its tail can move very quickly, and the wild boar often uses it to show when his mood. If seen from the front, the body looks quite narrow. The wild boar has 44 teeth in its jaw, which helps its strong bite. The male and the female wild boars' snout shapes are different. 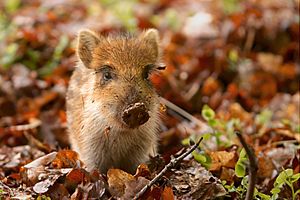 A wild boar piglet in the Netherlands

A wild boar usually gives birth to about 4 – 6 piglets at a time. Piglets weigh from about 750 – 1000g when they are first born. They are fully weaned after 3 – 4 months. They begin eating solid foods such as worms and grubs after about 2 weeks.

All content from Kiddle encyclopedia articles (including the article images and facts) can be freely used under Attribution-ShareAlike license, unless stated otherwise. Cite this article:
Wild boar Facts for Kids. Kiddle Encyclopedia.