Suidae is the family to which pigs and their relatives belong. Several species are currently recognised, including the domestic pig. In addition to numerous species of wild pig, the family includes the babirusa and the warthog.

Suids belong to the order Artiodactyla, and are generally regarded as the living members of that order most similar to the ancestral form. Unlike most other members of the order, they have four toes on each foot, although they walk only on the middle two digits, with the others staying clear of the ground. They also have a simple stomach, rather than the more complex, ruminant, stomach found in most other artiodactyl families.

They are small to medium animals, varying in size from 58 to 66 cm (23 to 26 in) in length, and 6 to 9 kg (13 to 20 lb) in weight in the case of the pygmy hog, to 130–210 cm (4.3–6.9 ft) and 100–275 kg (220–606 lb) in the giant forest hog. They have large heads and short necks, with relatively small eyes and prominent ears. Their heads have a distinctive snout, ending in a disc-shaped nose. Suids typically have a bristly coat, and a short tail ending in a tassle. The males possess a corkscrew-shaped penis, which fits into a similarly shaped groove in the female's cervix.

Suids have a well-developed sense of hearing, and are vocal animals, communicating with a series of grunts, squeals, and similar sounds. They also have an acute sense of smell. Many species are omnivorous, eating grass, leaves, roots, insects, worms, and even frogs or mice. Other species are more selective and purely herbivorous.

Their teeth reflect their diet, and suids retain the upper incisors, which are lost in most other artiodactyls. The canine teeth are enlarged to form prominent tusks, used for rooting in moist earth or undergrowth, and in fighting. They have only a short diastema. The number of teeth varies between species, but the general dental formula is: 1–3.1.2–4.3030.1.020.3. 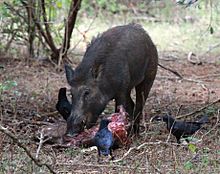 Suids are intelligent and adaptable animals. Adult females (sows) and their young travel in a group (sounder; see List of animal names), while adult males (boars) are either solitary, or travel in small bachelor groups. Males generally are not territorial, and come into conflict only during the mating season.

Litter size varies between one and twelve, depending on the species. The mother prepares a grass nest or similar den, which the young leave after about ten days. Suids are weaned at around three months, and become sexually mature at 18 months. In practice, however, male suids are unlikely to gain access to sows in the wild until they have reached their full physical size, at around four years of age. In all species, the male is significantly larger than the female, and possesses more prominent tusks.

All content from Kiddle encyclopedia articles (including the article images and facts) can be freely used under Attribution-ShareAlike license, unless stated otherwise. Cite this article:
Suidae Facts for Kids. Kiddle Encyclopedia.