Coelophysis was a small fast running carnivorous dinosaur. It is one of the earliest known genera of dinosaur. Coelophysis was found in Upper Triassic strata dated to about 200 million years ago (mya). It lived in what is now the southwestern United States. Similar dinosaurs are found all over the world at that time.

Coelophysis walked on two legs (as did all theropods). It was no more than about three feet (1 meter) tall at the hips but because of a long tail could be almost 10 feet (3 meters) long. There is some evidence that these animals hunted in packs, from the large numbers found together at the Ghost Ranch fossil site in New Mexico. 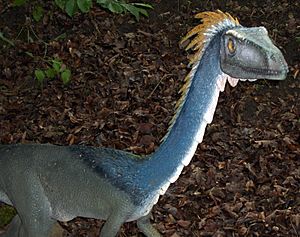 Model of Coelophysis with feathers

Two different sizes of this species have been found in the fossil record. At first paleontologists thought that they were two different species, but most now think that this is because Coelophysis males were larger than the females.

Coelophysis had a long narrow head (approximately 270 mm (0.9 ft)), with large, forward-facing eyes that afforded it stereoscopic vision and as a result excellent depth perception. The eyes were supported by bony rings ("sclerotic" rings). The complete sclerotic ring of a juvenile Coelophysis bauri was compared to those of reptiles and birds. Evidently Coelophysis was a daytime predator which hunted by sight. The study found that its vision was superior to that of most lizards, and ranked with that of modern birds of prey.

For a while, it was thought that Coelophysis were cannibalistic, because what looked like Coelophysis babies were seen in the stomach of an adult Coelophysis. However, these specimens were misinterpreted. Several specimens of "juvenile coelophysids" were actually small crurotarsan reptiles such as Hesperosuchus. In some cases bigger individuals were crushed on top of smaller ones. There is no longer any evidence to support cannibalistic behavior in Coelophysis.

Two C. bauri specimens at the Denver Museum of Nature and Science

History of its discovery

Edward Drinker Cope first named Coelophysis in 1889. This was during the "Bone Wars" with Othniel Charles Marsh. An amateur fossil collector, David Baldwin, found the first remains of the dinosaur in 1881. The type species, C. bauri was named after him. These first finds were too poorly preserved to give a complete picture of the new dinosaur.

In 1947, a substantial 'graveyard' of Coelophysis fossils was found in New Mexico, at Ghost Ranch, close to the original find. So many fossils together were probably the result of a flash flood, which swept away a large number of Coelophysis and buried them quickly and simultaneously. It seems such flooding was commonplace at the time. The Petrified Forest of nearby Arizona was caused by a log jam of tree trunks caught in a flood.

The Ghost Ranch specimens were numerous, with many well-preserved specimens. Since the Ghost Ranch specimens were discovered, more skeletons have been found in Arizona, New Mexico and an as-yet unconfirmed specimen from Utah, including both adults and juveniles. The deposits where Coelophysis was discovered date from the late Triassic, bur similar specimens have been found in the Lower Jurassic elsewhere in the world.

Coelophysis is the state fossil of New Mexico.

All content from Kiddle encyclopedia articles (including the article images and facts) can be freely used under Attribution-ShareAlike license, unless stated otherwise. Cite this article:
Coelophysis Facts for Kids. Kiddle Encyclopedia.