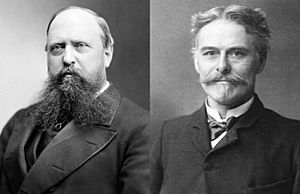 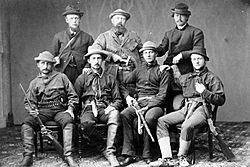 Marsh (back row and center), surrounded by armed assistants for his 1872 expedition. Marsh spent little time in the field himself, leaving the work to his agents 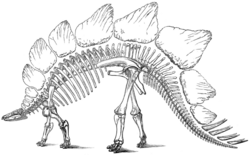 Marsh's 1896 illustration of the bones of Stegosaurus, a dinosaur he described and named in 1877

The Bone Wars was a period of fossil finding and discovery in the U.S.A during the late 19th century. Most of the action took place in Colorado, Nebraska, and Wyoming.

There was a heated rivalry between Edward Drinker Cope (of the Academy of Natural Sciences in Philadelphia) and Othniel Charles Marsh (of the Peabody Museum of Natural History at Yale). They used bribery, theft, and destruction of bones. Each scientist attacked the other in scientific publications, seeking to ruin his credibility and have his funding cut off.

Their search for fossils led them west to rich "bone beds" in the western United States. From 1877 to 1892, both paleontologists used their wealth and influence. They paid for their own expeditions, and the services and dinosaur bones from fossil hunters. By the end of the Bone Wars, both men had exhausted their funds in this way.

Cope and Marsh were financially and socially ruined by their attempts to disgrace each other. Their contributions to paleontology were massive and provided plenty of material for later work: both scientists left behind many unopened boxes of fossils after their deaths. 142 new species of dinosaurs were discovered and described by them, though today only 32 of their names are valid.

The products of the Bone Wars increased our knowledge of prehistoric life, and sparked the public's interest in dinosaurs. This led to more fossil excavation in North America in the decades that followed. Several historical books and fictional adaptations have been published about this period of intense fossil-hunting activity.

All content from Kiddle encyclopedia articles (including the article images and facts) can be freely used under Attribution-ShareAlike license, unless stated otherwise. Cite this article:
Bone Wars Facts for Kids. Kiddle Encyclopedia.