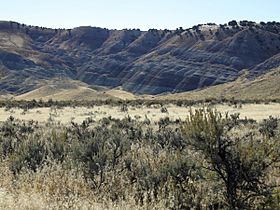 The distinctive banding of the Morrison Formation, a group of rock layers that occur throughout Dinosaur National Monument and the source of fossils like those found at the Dinosaur Quarry. 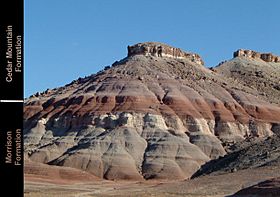 The Morrison Formation is a geological formation laid down in the Upper Jurassic. It is a distinctive sequence of sedimentary rock in the western United States, and is named after Morrison, Colorado. It has been the most fertile source of dinosaur fossils in North America.

It is composed of mudstone, sandstone, siltstone and limestone. Its colour is light grey, greenish gray, or red. Most of the fossils occur in the green siltstone beds and lower sandstones, relics of the rivers and floodplains of the Jurassic period.

The formation is in Wyoming and Colorado, with outcrops in Montana, North Dakota, South Dakota, Nebraska, Kansas, the panhandles of Oklahoma and Texas, New Mexico, Arizona, Utah, and Idaho. Equivalent rocks under different names are found in Canada. It covers an area of 1.5 million square km (600,000 square miles), although only a tiny fraction is exposed and accessible to geologists and paleontologists. Over 75% is still buried under the prairie to the east and much of the rest was destroyed by erosion as the Rocky Mountains rose to the west.

The first fossils were discovered by Arthur Lakes in 1877. That same year, it became the center of the Bone Wars, a fossil-collecting rivalry between early paleontologists Othniel Charles Marsh and Edward Drinker Cope. 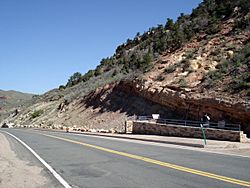 Morrison at the type locality (the location that defines the formation) at Dinosaur Ridge, west of Denver, Colorado.

In Colorado, New Mexico, and Utah, the Morrison Formation was a major source of uranium ore.

According to radiometric dating, the Morrison Formation dates from 156.3 ± 2 million years old at its base, to 146.8 ± 1 million years old at the top, which places it in the later Jurassic. This is similar in age to the Solnhofen Limestone Formation in Germany and the Tendaguru Formation in Tanzania. Throughout the western USA, it lays over the Middle Jurassic Summerville, Sundance, Bell Ranch, Wanakah, and Stump Formations.

At the time, the supercontinent of Laurasia had recently split into the continents of North America and Eurasia, although they were still connected by land bridges. North America moved north and was passing through the subtropical regions.

The area was low-lying, and sediments were laid down in rivers, lakes, shallow water of various kinds. The details varied from time to time.

The Morrison Basin, which stretched from New Mexico in the south to Alberta and Saskatchewan in the north, was formed when the early pre-Rocky Mountains started pushing up to the west. Streams and rivers in the east-facing drainage basin swept sediment down from the heights. The sediment was dropped in swampy lowlands, lakes, river channels and floodplains. In the course of time, this became the Morrison Formation.

In the north, the Sundance Sea, an extension of the Arctic Ocean, stretched through Canada down to the United States. Coal is found in the Morrison Formation of Montana, which means that the northern part of the formation, along the shores of the sea, was wet and swampy, with much vegetation. Aeolian, or wind-deposited sandstones are found in the southwestern part, which indicates it was much more arid — a desert, with sand dunes. 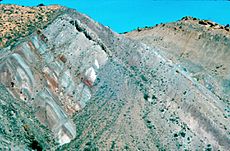 Dinosaur National Monument is a National Monument on the southeast flank of the Uinta Mountains on the border between Colorado and Utah at the confluence of the Green and Yampa Rivers. The Dinosaur Quarry 40°26′29″N 109°18′04″W﻿ / ﻿40.44139°N 109.30111°W﻿ / 40.44139; -109.30111 is in Utah just to the north of the town of Jensen, Utah. This park has fossils of dinosaurs including Allosaurus, Abydosaurus (a nearly complete skull, lower jaws and first four neck vertebrae of the specimen DINO 16488 was found here) and various long-neck, long-tail sauropods.

The dinosaur fossil beds (bone beds) were discovered in 1909 by Earl Douglass, a paleontologist working and collecting for the Carnegie Museum. He and his crews excavated thousands of fossils and shipped them back to the museum in Pittsburgh, Pennsylvania for study and display. President Woodrow Wilson proclaimed the dinosaur beds as Dinosaur National Monument in 1915. The monument boundaries were expanded in 1938 from the original 80-acre (320,000 m2) tract surrounding the dinosaur quarry in Utah, to its present extent of over 200,000 acres (800 km²) in Utah and Colorado, including the spectacular river canyons of the Green and Yampa.

The roster of dinosaurs from the Morrison is impressive. Among the theropods, Allosaurus, Saurophaganax, Torvosaurus, Ceratosaurus, Coelurus, Ornitholestes, Tanycolagreus, Stokesosaurus, and Marshosaurus are found in the Morrison. An abundance of sauropods has been found there, including Apatosaurus, Diplodocus, Barosaurus, Brachiosaurus, Camarasaurus, and Amphicoelias, which is possibly the largest known dinosaur ever to exist. Two genera of stegosaurs, Stegosaurus and Hesperosaurus, have been found there. Finally, ornithopods found in the Morrison include Dryosaurus, Camptosaurus, Drinker, Othnielia, and Othnielosaurus.

All content from Kiddle encyclopedia articles (including the article images and facts) can be freely used under Attribution-ShareAlike license, unless stated otherwise. Cite this article:
Morrison Formation Facts for Kids. Kiddle Encyclopedia.