Amphicoelias is a genus of herbivorous sauropod dinosaur that lived approximately 150 million years ago during the Tithonian (Late Jurassic Period) of what is now Colorado, United States. A herbivore, Amphicoelias was moderately sized at about 60–65 m (197–213 ft) long. Its hind limbs were very long and thin, and its forelimbs were proportionally longer. 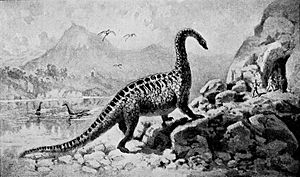 In 1877, a number of fossils were discovered in rock outcrops in Colorado close to Canyon City. Among the assortment of fossils discovered, a specimen including multiple dorsal vertebrae, a pubis, and a femur were found. It was determined that the taxon would have been a sauropod.

The specimen was acquired by the American Museum of Natural History (AMNH) in 1897. Based on collection data, the specimen was determined to have come from the Late Jurassic Morrison Formation.

The Morrison Formation environment in which Amphicoelias lived would have resembled a modern savanna, though since grass did not appear until the Late Cretaceous, ferns were probably the dominant plant and main food source for Amphicoelias. It is thought that giant herbivores like Amphicoelias may have used the shade of the forests to stay cool during the day, and did most of their feeding on the open savanna at night.

All content from Kiddle encyclopedia articles (including the article images and facts) can be freely used under Attribution-ShareAlike license, unless stated otherwise. Cite this article:
Amphicoelias Facts for Kids. Kiddle Encyclopedia.