Camarasaurus (meaning "chambered lizard") was a large plant-eating sauropod. It was about 18 meters long and weighed about 18 metric tones. Its name comes from its skull, which is in the shape of an arch. It lived during the late Jurassic, between 155 and 145 million years ago. These dinosaurs may have lived in herds.

It was first discovered in 1877 in Colorado by Oramel W. Lucas. Its fossil remains have been found in the Morrison Formation of Colorado, New Mexico, Utah, and Wyoming.

There are four species of Camarasaurus:

It was shown in the movie When Dinosaurs Roamed America.

Camarasaurus is among the most common and frequently well-preserved sauropod dinosaurs. The maximum size of the most common species, C. lentus, was about 15 meters (50 ft) in length. The largest species, C. supremus, reached a maximum length of 23 meters (75 ft) and maximum estimated weight of 47 tonnes (51.8 tons).

The arched skull of Camarasaurus was remarkably square and the blunt snout had many fenestrae (openings). It was sturdy and is often found in good condition by paleontologists. The 19 centimeter long (7.5 in) teeth were shaped like chisels (spatulate) and arranged evenly along the jaw. The strength of the teeth indicates that Camarasaurus probably ate coarser plant material than the slender-toothed diplodocids. 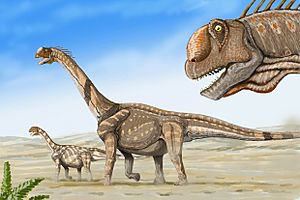 There is a fossil record of two adults and a 12.2 meter (40 ft) long juvenile that died together in the late Jurassic leriod, about 150 million years ago (northeast Wyoming). It is assumed that their bodies were washed to their final resting place, in river mud. This suggests that Camarasaurus traveled in herds or, at least, 'family' groups. Also, recovered camarasaur eggs have been found in lines, rather than in neatly arranged nests as with some other dinosaurs, which appears to suggest that, like most sauropods, Camarasaurus did not tend its young.

All content from Kiddle encyclopedia articles (including the article images and facts) can be freely used under Attribution-ShareAlike license, unless stated otherwise. Cite this article:
Camarasaurus Facts for Kids. Kiddle Encyclopedia.