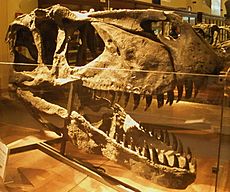 Torvosaurus was a large carnivorous dinosaur, from the Upper Jurassic. It lived about 153 to 148 million years ago in what is now Colorado and Portugal.

Torvosaurus, possibly the largest carnivore of its time, was a large, heavily-built, bipedal carnivore. It grew to 9 to 11 meters (30 to 36 ft) in length and an estimated weight of about 2 metric tons (2.2 tons). Its hands and arms were about average for its size. In proportion, Allosaurus had more powerful arms, and T. rex had tiny arms.

Studies suggest that the paleoenvironment of this part of the Morrison Formation had rivers flowing from the west into a basin with a giant, saline alkaline lake. There were extensive wetlands nearby. Fossils from the Dry Mesa Dinosaur Quarry of western Colorado show one of the most diverse Upper Jurassic vertebrate assemblages in the world. The Dry Mesa Quarry has produced the remains of the sauropods Apatosaurus, Diplodocus, Barosaurus, Supersaurus, Dystylosaurus, Camarasaurus, the iguanodontid Camptosaurus, and the theropods Allosaurus, Ceratosaurus and Ornitholestes, as well as Dryosaurus, and Stegosaurus.

All content from Kiddle encyclopedia articles (including the article images and facts) can be freely used under Attribution-ShareAlike license, unless stated otherwise. Cite this article:
Torvosaurus Facts for Kids. Kiddle Encyclopedia.