In contrast to most other sauropods, brachiosaurids had an inclined back, due to their long forelimbs. Therefore, if the neck exited the body in a straight line, it already pointed upwards. The exact angle is influenced by how the pectoral girdle is reconstructed, that is how the shoulder blades are placed on the ribcage. The mobility of the neck was reconstructed as quite low by Stevens and Parrish, while other researchers like Paul and Christian and Dzemski argued for more flexible necks. 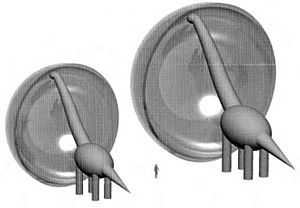 The feeding range of Brachiosaurus and Sauroposeidon

Brachiosaurus is thought to have been a high browser, feeding on foliage well above the ground. Even if it did not hold its neck near vertical, and instead had a straighter neck, its head height may still have been over 9 metres (30 ft) above the ground. It probably fed mostly on foliage above 5 metres (16 ft). This does not preclude the possibility that it also fed lower at times, between 3 to 5 metres (9.8 to 16.4 ft) up. Its diet likely consisted of ginkgos, conifers, tree ferns, and large cycads, with intake estimated at 200 to 400 kilograms (440 to 880 lb) of plant matter daily. However, more recent studies estimate that ~240 kilograms (530 lb) of plant matter would have been sufficient to feed a 70 metric tons (77 short tons) sauropod, so Brachiosaurus may have required only about 120 kilograms (260 lb) of fodder a day. Brachiosaur feeding involved simple up–and–down jaw motion. The teeth were arranged to shear material as they closed, and were probably used to crop and/or nip vegetation.

It has repeatedly been suggested, e.g. in the movie Jurassic Park, that Brachiosaurus could rear into a bipedal or tripodal (with tail support) pose to feed. However, a detailed physical modelling-based analysis of sauropod rearing capabilities by Heinrich Mallison showed that while many sauropods could rear, the unusual brachiosaurid body shape and limb length ratio made them exceptionally ill suited for rearing. The forward position of the center of mass would have led to problems with stability, and required unreasonably large forces in the hips to obtain an upright posture. Brachiosaurus would also have gained relatively little from rearing (only 33% more feeding height), compared to other sauropods, for which a bipedal pose may have tripled the feeding height.

Like all sauropods, Brachiosaurus was homeothermic (maintaining a stable internal temperature) and endothermic (controlling body temperature through internal means), meaning that it was able to actively control its body temperature ("warm-blooded"), producing the necessary heat through a high basic metabolic rate of its cells. In the past, Brachiosaurus has been used an example of a dinosaur for which endothermy is unlikely, because of the combination of great size (leading to overheating) and great caloric needs to fuel endothermy. However, these calculations were based on incorrect assumptions about the available cooling surfaces (the large air sacs were not known), and a grossly inflated body mass. These inaccuracies resulted in the overestimation of heat production and the underestimation of heat loss. The large nasal arch has been postulated as an adaptation for cooling the brain, as a surface for evaporative cooling of the blood.

All content from Kiddle encyclopedia articles (including the article images and facts) can be freely used under Attribution-ShareAlike license, unless stated otherwise. Cite this article:
Brachiosaurus Facts for Kids. Kiddle Encyclopedia.