Denver Museum of Nature and Science facts for kids

The Denver Museum of Nature & Science is a municipal natural history and science museum in Denver, Colorado. It is a resource for informal science education in the Rocky Mountain region. A variety of exhibitions, programs, and activities help museum visitors learn about the natural history of Colorado, Earth, and the universe. The 716,000-square-foot (66,519 m2) building houses more than one million objects in its collections including natural history and anthropological materials, as well as archival and library resources.

The museum is an independent, nonprofit institution with approximately 350 full-time and part-time staff, more than 1,800 volunteers, and a 25-member board of trustees. It is accredited by the American Alliance of Museums and is a Smithsonian Institution affiliate.

The museum provides programming in six main areas. The exhibitions, IMAX films, lectures, classes, and programs pertain to one or more of the following core competencies: anthropology, geology, health science, paleontology, space science, and zoology. More than 300,000 students and teachers visit the museum with school groups each year. In addition, the museum has science outreach programs and distance–learning opportunities for families, schools and surrounding communities. The museum also offers ongoing professional training workshops for teachers. 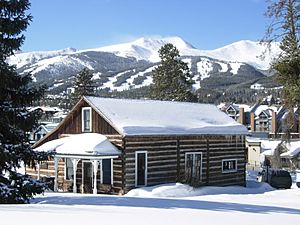 In 1868, Edwin Carter moved into a tiny cabin in Breckenridge, Colorado, to pursue his passion, the scientific study of the birds and mammals of the Rocky Mountains. Almost single-handedly, Carter assembled one of the most complete collections of Colorado fauna then in existence.

Word of Carter's collection spread and, in 1892, a group of prominent Denver citizens declared their interest in moving his collection to the capital city for all to see. Carter offered to sell the entire collection for $10,000. The founders also secured a collection of butterflies and moths, and a collection of crystallized gold.

Together, these three collections formed the nucleus of what would become the Colorado Museum of Natural History, officially incorporated on December 6, 1900. After years of preparation and construction, the Colorado Museum of Natural History finally opened to the public on July 1, 1908. John Campion, the first president of the board, said in his dedication address, "A museum of natural history is never finished". The first director was hired and quickly recruited staff to build more exhibits and create public programs. By 1918, another wing had opened and research efforts were well underway.

In 1927, a team led by the Colorado Museum discovered two stone projectile points embedded in an extinct species of bison, in Folsom, New Mexico. These Folsom points demonstrated that humans had lived in North America more than 10,000 years ago, hundreds of years earlier than previously believed.

The museum is partially funded by the Scientific and Cultural Facilities District (SCFD), which was created by area voters in 1988. It has also attracted large donations from benefactors, such as Morgridge Family Foundation led by philanthropist Carrie Morgridge, which gave $8 million to the museum in 2010, described as being the largest single gift since its founding. 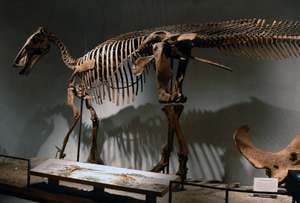 Expedition Health teaches visitors about the human body, including the science of taste. It opened on March 30, 2009, replacing the former Hall of Life.

Space Odyssey, which opened in 2003 and underwent a refurbishment in 2020, is about the Universe and our place in it. One major highlight of the exhibit is a full-scale replica of a Mars Exploration Rover, which was formerly found outside the exhibit from around 2004 to around 2016 or 2017.

Prehistoric Journey, which opened in 1995, traces the evolution of life on Earth. Displays include skeletons of Edmontosaurus, Maiasaura, Diplodocus, Gargoyleosaurus, Allosaurus, Stegosaurus, Othnielia and Coelophysis, a sea lily reef diorama from 435 million years ago, a cast/replica skull of the ancient placoderm fish, Dunkleosteus, and a collection of trilobites.

Birds of the Americas

Edge of the Wild

Out of all of the dioramas in the museum listed here, only one, Western Brazil, which depicted wildlife on the Brazilian savanna, was removed for not being scientifically accurate, because it included animals that didn't naturally interact with each other in the wild. However, at least three pieces of evidence that prove that the diorama did exist can be found in the museum: one being a cropped image of the screenshot of the diorama's brocket deer from the museum's 1961 annual report in Edge of the Wild, and the other two being the scarlet macaw and blue-fronted parrot found in the glass case at South America's entry wall.

Insects & Butterflies is a wildlife exhibit on the first floor that's separated into four displays: Pinning Down Insects, which classifies the different groups of arthropods and features the twelve common orders of insects; Deceits & Defenses, which shows different insects that have their own ways of defending themselves, as well as including a miniature diorama depicting a foothills shrubland with many hidden insects; Colorado Lepidoptera, which features 171 species of butterflies and moths found in Colorado including the Colorado hairstreak, Colorado's state insect; and Form Follows Function, which shows the life cycle of a mourning cloak butterfly, a small collection of rainforest butterflies, and two species of Morpho butterflies next to a model of scales from one of the wings of a blue morpho.

Egyptian Mummies contains two mummies, along with several coffins and other various antiquities from ancient Egypt. In both 1991 and 2016, the mummies were subjected to CT scans at Children's Hospital in Aurora, Colorado.

Coors Gems & Minerals is a hall where visitors can examine many colorful crystals and minerals found both locally and globally. It features a re-created mine based off of the Sweet Home mine, where the Alma King, the largest specimen of rhodochrosite exhibited near the entrance, was originally found on August 21, 1992. It is also home to the museum's oldest exhibit: crystallized leaf gold, which was donated in 1900, the same year the museum was founded.

The Crane Hall of North American Indian Cultures explores the diversity among Native American groups and the practicality and artistry of their everyday objects. One of its highlights is the totem poles found near the entrance.

In addition to the exhibit halls, skeletons of Tyrannosaurus rex, a pair of Thalassomedon and a fin whale, as well as a replica of the Chief Kyan totem pole, can be found in the rotunda. A display that shows how escalators work is also found at one of the two up escalators on the first floor. 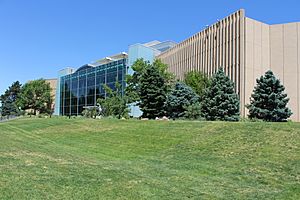 In 2014, a $70 million addition was added to the museum containing the Morgridge Family Exploration Center and the Avenir Collections Center.

The Avenir Collections Center, part of a $70 million expansion in 2007, is a climate-controlled facility devoted to housing for nearly 1.5 million artifacts and specimens. The facility includes 63,000 square feet in two underground levels, and holds specimens such as bison from the 1870s, passenger pigeons, the last grizzly bear to be killed in Colorado in 1979, and roadkill brought in by the public. The data from these specimens is placed in online databases, and linked to public databases, like BioPortal.

The museum contains a number of hidden secrets that visitors may search for. On the Denver Museum website, there are four different downloadable scavenger hunts available, ranging from State Parks to "Museum Treasures". Kent Pendleton, one of the museum's diorama painters, painted eight elves in his work, hidden throughout the museum. Guests are encouraged to search for the elves with one of the printable scavenger hunts. In the IMAX lobby entrance there are several painted pictures hidden on the walls relating to Star Wars.

All content from Kiddle encyclopedia articles (including the article images and facts) can be freely used under Attribution-ShareAlike license, unless stated otherwise. Cite this article:
Denver Museum of Nature and Science Facts for Kids. Kiddle Encyclopedia.