The chacma baboon (Papio ursinus), also known as the Cape baboon, is, like all other baboons, from the Old World monkey family. It is one of the largest of all monkeys. Located primarily in southern Africa, the chacma baboon has a wide variety of social behaviors, including a dominance hierarchy, collective foraging, adoption of young by females, and friendship pairings. These behaviors form parts of a complex evolutionary ecology. In general, the species is not threatened, but human population pressure has increased contact between humans and baboons. Hunting, trapping, and accidents kill or remove many baboons from the wild, thereby reducing baboon numbers and disrupting their social structure.

The chacma baboon is perhaps the longest species of monkey, with a male body length of 50–115 cm (20–45 in) and tail length of 45–84 cm (18–33 in). It also one of the heaviest; the male weighs from 21 to 45 kg (46 to 99 lb) with an average of 31.8 kg (70 lb). Baboons are sexually dimorphic, and females are considerably smaller than males. The female chacma weighs from 12 to 25 kg (26 to 55 lb), with an average of 15.4 kg (34 lb). It is similar in size to the olive baboon, averaging slightly higher in mean body mass, and of similar weight to the more compact mandrill, the males of which weigh on average about 1 kg (2.2 lb) more than a chacma baboon, the females weigh 3 kg (6.6 lb) less than the female chacma. While the mandrill is usually crowned the largest of all modern monkeys, going on total length and average (but not maximum) body weight between the sexes, the chacma baboon appears to be the largest extant monkey. The chacma baboon is generally dark brown to gray in color, with a patch of rough hair on the nape of its neck. Unlike the males of northern baboon species (the Guinea, hamadryas, and olive baboons), chacma males do not have a mane. Perhaps the most distinctive feature of this baboon is its long, downward-sloping face. The canine teeth of male chacma baboons have a mean length of 3.86 ± 0.30 cm (1.52 ± 0.12 in) at the time they emigrate from their natal troop. This is the time of greatest tooth length as the teeth tend to wear or be broken thereafter.

The three subspecies are differentiated by size and color. The Cape chacma is a large, heavy, dark-brown, and has black feet. The gray-footed chacma is slightly smaller than the Cape chacma, lighter in color and build, and has gray feet. The Ruacana chacma generally appears to be a smaller, less darkly colored version of the Cape chacma.

The chacma baboon inhabits a wide array of habitats including woodland, savanna, steppes, and sub desert, from the grassy alpine slopes of the Drakensberg to the Kalahari desert. During the night, the chacma baboon sleeps atop steep hills, high cliffs or rocks or in large trees, away from predators. In daytime, water availability may limit its range in arid areas. It is found throughout southern Africa, ranging from South Africa north to Angola, Zambia, and Mozambique. The subspecies are divided across this range. The Cape chacma is found in southern South Africa; the gray-footed chacma, is present from northern South Africa, through the Okavango Delta in Botswana, Zimbabwe, Mozambique (south of the Zambezi), to southwest Zambia; and the Ruacana chacma is found in northern Namibia and southern Angola.

The chacma baboon is an omnivorous opportunistic feeder, and will eat practically anything; typical foods include fruits, seeds, grass, blossoms, bulbs, bark, insects, worms, rodents, birds, small antelope and fungi (the desert truffle Kalaharituber pfeilii). They are fond of various crops and will also kill and eat sheep, goats and poultry. They are considered vermin by most African farmers. At the Cape of Good Hope in particular, chacma baboons are also known for taking shellfish and other small marine invertebrates. It is generally a scavenger when it comes to game meat, and rarely engages in hunting larger animals. One incident of a chacma baboon killing a human infant has been reported, but the event is so rare, the locals believed it was due to witchcraft. Normally, wild chacma baboons will flee at the approach of humans, though this is changing due to the easy availability of food and garbage from human dwellings in villages and towns near the baboons habitat.

The chacma baboon usually lives in social groups, called troops, which are composed of multiple adult males, adult females, and their offspring. Occasionally, however, very small groups form that consist of only a single adult male and several adult females. Chacma troops are characterized by a dominance hierarchy. Female ranking within the troop is inherited through the mother and remains relatively fixed, while the male ranking is often in flux, especially when the dominant male is replaced. Chacmas are unusual among baboons in that neither males nor females form strong relationships with members of the same sex. Instead, the strongest social bonds are often between unrelated adult males and females. Infanticide is much more common among Chacmas compared to most other baboon species, as newly dominant males will often kill infants or young baboons sired by the previously dominant male. Baboon troops possess a complex group behavior and communicate by means of body attitudes, facial expressions, vocalizations and touch.

The chacma baboon often sleeps in large groups on high rocks, cliffs or in trees at night to avoid predators. The morning dispersal from the sleeping site is synchronized, with all members leaving at the same time. In most cases, dispersal is initiated by a single individual, and the other members of the group decide whether or not to follow. At least five followers must be recruited for a successful dispersal initiation, and not all initiation attempts are successful. Surprisingly, the initiator's dominance status shows little correlation with successful initiation of departure; more-dominant individuals are no more likely to lead a successful departure than subordinate individuals.

Chacma baboons that play a more central role in the group (as measured by grooming behavior and time spent with other members) are more likely to be followed during the morning dispersal. This study concluded that group members are more likely to follow the behavior of individuals with which they are closely affiliated. 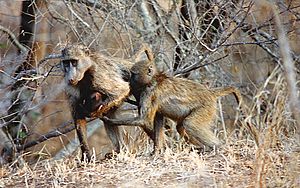 Chacma baboons have been observed to adopt orphaned young

Dominance does play a role in group foraging decisions. A dominant individual (usually the alpha male) leads the group to easily monopolized resources. The group usually follows, even though many subordinate members cannot gain access to that particular resource. As in morning dispersal, the inclination of group members to follow the leader is positively associated with social interactions with that dominant individual.

Collective foraging behavior, with many individuals taking advantage of the same resource at once, has also been observed. However, this behavior can be chiefly attributed to shared dietary needs rather than social affiliation. Pregnant females, who share similar dietary needs, are more likely to synchronize their behavior than fertile females. Foraging synchronization decreases in areas with lower food density.

Adoption behavior has been observed in chacma baboons. Orphaned baboons whose mothers have disappeared or died are often too small to care for themselves. In one study of nine natural orphans and three introduced orphans, all but one orphan were adopted by another member of the group. 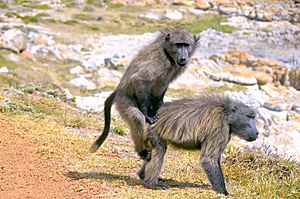 Males and female chacma baboons often form relationships referred to as "friendships". The females are believed to seek out male friendships to gain protection. 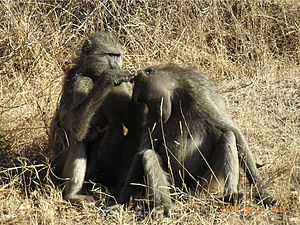 Female chacma baboons have been observed to compete with each other for male friends. This may be the result of one male having a high probability of paternity with multiple females. These competitions are heavily influenced by the female dominance hierarchy, with dominant females displacing subordinate females in friendships with males.

All content from Kiddle encyclopedia articles (including the article images and facts) can be freely used under Attribution-ShareAlike license, unless stated otherwise. Cite this article:
Chacma baboon Facts for Kids. Kiddle Encyclopedia.