Angola,, officially the Republic of Angola, is a country in southern Africa bordered by Namibia on the south, the Democratic Republic of the Congo on the north, and Zambia on the east; its west coast is on the Atlantic Ocean with Luanda as its capital city.

Angola is a member state of the African Union, the Community of Portuguese Language Countries, the Latin Union, South Atlantic Peace and Cooperation Zone and the Southern African Development Community.

Portugal built up its power in Angola from the late 15th to the middle 20th century.

After independence there was a civil war from 1975 to 2002. Cuba and the Soviet Bloc supported the ruling People's Movement for the Liberation of Angola (MPLA). South Africa supported the insurgent anti-communist National Union for the Total Independence of Angola (UNITA). The war ended after the rebel leader was killed.

Angola is the world's twenty-third largest country. Angola is bordered by Namibia to the south, Zambia to the east, the Democratic Republic of the Congo to the north-east, and the South Atlantic Ocean to the west. 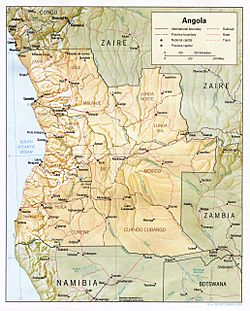 Angola is divided into eighteen provinces.

See List of settlements in Angola for the cities and towns in the country.

All content from Kiddle encyclopedia articles (including the article images and facts) can be freely used under Attribution-ShareAlike license, unless stated otherwise. Cite this article:
Angola Facts for Kids. Kiddle Encyclopedia.