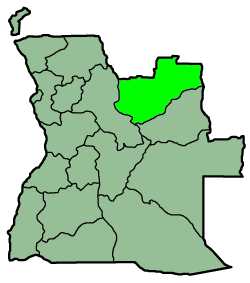 Map of Angola with the province highlighted

Lunda Norte is a province of Angola. There are about 850,000 people. Angola's first President, Agostino Neto, made Lucapa the capital after independence. It was later moved to Dundo. The province is rich in diamonds, but is underdeveloped and poor.

All content from Kiddle encyclopedia articles (including the article images and facts) can be freely used under Attribution-ShareAlike license, unless stated otherwise. Cite this article:
Lunda Norte Province Facts for Kids. Kiddle Encyclopedia.