Angolan cuisine has many dishes popular among nationals and foreigners. One of the most popular being funge (which is made from the cassava or corn flour), mufete (having grilled fish, plantain, sweet potato, cassava, and gari). There is also calulu, moamba de galinha, moamba de ginguba, kissaca and so many more delicious dishes. In addition, there is also the extremely popular mukua sorbet.

Staple ingredients include beans and rice, pork and chicken, various sauces, and vegetables such as tomatoes, onions. Spices such as garlic are also frequently seen. Funge, a type of porridge made with cassava is a staple dish.

There are many influences from Portuguese cuisine like the use of olive oil. Piripiri is a local hot sauce. 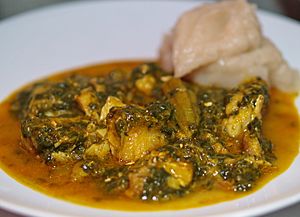 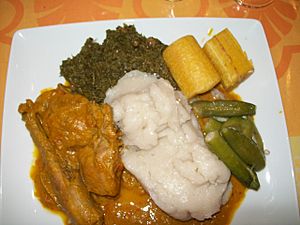 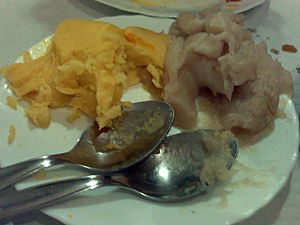 Maize (left) and cassava funge (right), a typical side dish in Angola 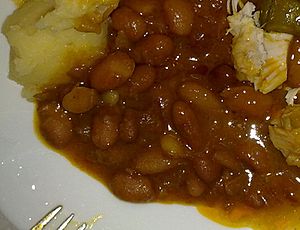 Funge (or funje) and pirão are very common dishes, and in poorer households often consumed at every meal. The dish is often eaten with fish, pork, chicken, or beans. Funge de bombo, more common in northern Angola, is a paste or porridge of cassava (also called manioc or yuca), made from cassava flour. It is gelatinous in consistency and gray in color. Pirão, yellow in color and similar to polenta, is made from cornflour and is more common in the south. Fuba is the term for the flour that is used to make either funge and pirão, also used to make angu, the Brazilian polenta. Both foods are described as bland but filling and are often eaten with sauces and juices or with gindungo (see below), a spicy condiment.

Other dishes common in Angolan cuisine include:

All content from Kiddle encyclopedia articles (including the article images and facts) can be freely used under Attribution-ShareAlike license, unless stated otherwise. Cite this article:
Angolan cuisine Facts for Kids. Kiddle Encyclopedia.