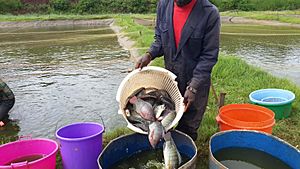 Tilapia at fish farm in Kenya.

Tilapia is a fish that is often farmed for food, or kept as pets in aquariums. They live in warm, fresh water, but some species live in brackish water. The fish are found in Africa, North and South America, India, and Sri Lanka.

They are listed as one of the worlds worst introduced species. They can quickly take over from native fish in rivers. This has happened in places like in the Endeavour River, in Queensland, Australia. These fish are thought to have been released into the river from an aquarium.

All content from Kiddle encyclopedia articles (including the article images and facts) can be freely used under Attribution-ShareAlike license, unless stated otherwise. Cite this article:
Tilapia Facts for Kids. Kiddle Encyclopedia.