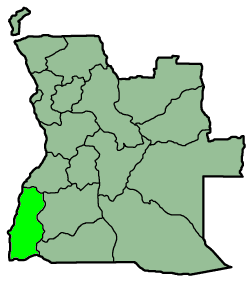 Namibe is a province of Angola. It was called Moçâmedes when under Portuguese rule. There were 313,667people in 2006. The port and city of Namibe is the capital. Iona National Park is also located there.

Late Cretaceous fossils of sharks, turtles, mosasaurs, plesiosaurs and sauropods were found near the Bentiaba desert.

All content from Kiddle encyclopedia articles (including the article images and facts) can be freely used under Attribution-ShareAlike license, unless stated otherwise. Cite this article:
Namibe Province Facts for Kids. Kiddle Encyclopedia.