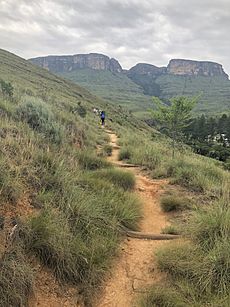 Hiking trail in the Drakensberg Mountains.

Drakensberg (derived from Afrikaans Drakensberge, literally: Dragon mountains) is the highest mountain range in Southern Africa. The highest peak is in Lesotho, where they are called Maloti. The drakensberg are also known for their many waterfalls, and cave paintings done by the San people.UKhahlamba-Drakensberg Park, which was created in 2000, is an UNESCO World Heritage Site which covers part of the range.

All content from Kiddle encyclopedia articles (including the article images and facts) can be freely used under Attribution-ShareAlike license, unless stated otherwise. Cite this article:
Drakensberg Facts for Kids. Kiddle Encyclopedia.