Nymphalis antiopa, known as the mourning cloak in North America and the Camberwell beauty in Britain, is a large butterfly native to Eurasia and North America.

These butterflies have a lifespan of 11 to 12 months, one of the longest lifespans for any butterfly.

It is also the state insect of the U.S. state of Montana, adopted in 2001.

In several European countries with Germanic languages, other than Britain, the name for this butterfly literally translates to "mourning cloak", such as German "Trauermantel", Dutch "rouwmantel", Swedish "sorgmantel", Finnish "suruvaippa" and Norwegian "sørgekåpe". This suggests it is a name which came with Scandinavian or German rather than with British settlers, for whom this species would be considerably less familiar. Other common names include: Czech "Černokábátník" . "Babočka osiková". Polish "Rusałka żałobnik". Russian "Траурница" . Japanese "キベリタテハ" . Chinese "黄縁立羽". L. Hugh Newman likened the butterfly's pattern to a girl who, disliking having to be in mourning, defiantly let a few inches of a bright dress show below her mourning dress.

The name originated from the discovery of two individuals at Coldharbour Lane in Camberwell in August 1748. Camberwell is in South London, about three miles south of London Bridge—in reporting this, the author Moses Harris named the species grand surprise or Camberwell beauty (Bretherton & Emmet, 1990). 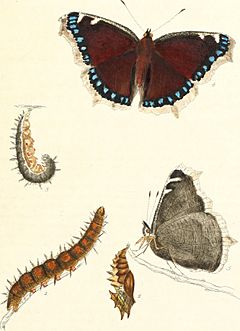 Illustration from The Papilios of Great Britain

The mourning cloak butterflies are distributed broadly around the northern hemisphere. They are commonly found throughout all of North America and northern Eurasia. Three subspecies of mourning cloak butterflies are found throughout North America: northern Nymphalis antiopa hyperborea Seitz, 1913; eastern N. a. lintnerii Fitch, 1857; southwestern N. a. thomsoni Butler, 1887. They can usually be found in hardwood forests, though they have been found in virtually all habitats. They may also be found as far as the northern part of South America, though they are typically not seen as frequently in southern states such as Florida, Louisiana, or Texas. They are occasionally seen in the more temperate places in Asia, and a few have even been seen in Japan. However, the mourning cloaks tend to be found predominantly in cold, mountainous areas.

Migrants arrive in Great Britain most years during summer and autumn, but numbers are usually very low. There is no evidence that the species breeds in Britain; it is thought that mild, wet winters prevent them from surviving there for very long. The 'Butterfly Farmer' L. Hugh Newman raised thousands for release at his 'farm' in Bexley, but none were seen the following spring. Specimens stored in his refrigerator for the winter, however, survived. In a book he said that Camberwell Beauty catches in England were suspiciously concentrated around London, Hull and Harwich, all these being ports in the timber trade with Scandinavia, and theorized that they had hibernated in stacks of timber which was then shipped to England, and had not traveled naturally. 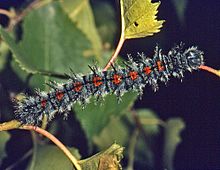 Mourning cloak eggs are amber-yellow or pale olive-green when first laid. Upon further development, the coloration of the eggs will change, becoming lilac-pink, and darkening to almost black, as they mature prior to hatching. The eggs are generally 0.7 by 0.9 mm in size. Laid on terminal shoots of the larval food-plant, encircling the stem. Later in season, when the leaves appear, females also lay the eggs on the upper surface.

The spiny caterpillars are striking in appearance, with black bodies and a line of eight reddish-orange dots running down the back (aposematic, warning coloration). The prolegs are dark red. The body is covered with short hairs and black spines and white dots. The fully grown mourning cloak caterpillars attain two inches in length.

Mourning cloak pupae are on average 0.8 inches (2.0 cm) in length, though they can reach over 1.1 inches (2.8 cm) in length. They tend to be a tan or brown gray, with two rows of sharp, red-tipped spikes protruding from the ventro-lateral side of the pupae. The chrysalis has a "beak", tubercles, and two head horns.

The mourning cloak butterfly is a large, unique butterfly, with special markings that do not match those of any other butterfly, making it easily distinguishable. It can have a wingspan up to four inches. The dorsal side of its wings are a dark maroon, or occasionally brown, with ragged pale-yellow edges. Bright, iridescent blue spots line the black demarcation between the maroon and the yellow. The ventral side of the wings has gray striations, with the same pale-yellow edges. They are a part of the family Nymphalidae, called the brush-footed butterflies due to their hairy front legs. The species does not display any obvious sexual dimorphism.

Mourning cloak butterflies display polygynous mating behavior, where an individual male will mate with multiple females throughout one breeding season. He will either use a display site to attract females or fly around searching for females that are more widely dispersed in a process called scramble competition polygyny. This means that male mourning cloak butterflies primarily lek, or display territorial behavior, in which they settle and defend desirable areas, such as those that either offer increased probability of females or those that provide ample amounts of good resources. The more desirable territories will be able to increase the males' chances of reproductive success. Thus, lekking maximizes the males' ability to attract the most female butterflies, either by being in a prime location to view them or to have a location that females would want to visit. Locations of choice typically include sunny perches near ravines, wood margins, parks, gardens, lakes, ponds, around stream edges, or canyons in which males can perch and defend for multiple days. These locations can be more than an area of 300 square meters. Given the male-male competition for mating, this strategy offers males an ideal location in order to maximize success in territorial protection, and thus mating. Despite the fact that butterflies, particularly the mourning cloak butterflies, have an affinity for perches on high objects, they are not known to display any hilltopping behavior, where male butterflies fly up to perch on hill summits.

Spring marks the beginning of their mating season, when female mourning cloaks will find a host plant and begin to lay their eggs. Adult mourning cloak butterflies can first be seen in late spring through early summer. They then aestivate for the summer, where they will enter into a "dormant" state similar to that of hibernation. In concordance with this is the mourning cloak butterflies' exhibition of diapause, which is a suspension in development in response to certain conditions, such as environmental stimuli. They will break diapause once some, though not all, of the butterflies start to migrate through September and October. They then overwinter, and then restart their mating cycle throughout the spring, from April through June.

Mourning cloaks, like all other butterflies, undergo complete metamorphosis. Egg →Larva (L1 ... L5) → Pupa → Adult. Before the leaves bud-out, Mourning cloaks are known to lay their eggs as ring clusters around the terminal twigs on host plants. The host plant selection is vital because it provides the food source for the young caterpillars. Females are known to have multiple broods, typically up to two to three. The newly hatched caterpillars will group together until they shed their skin—termed an instar for each shedding. This shedding event occurs four times throughout development in a process called ecdysis. The larvae experience a fifth skin shed to produce a fully grown caterpillar. The next stage in the mourning cloak's life cycle is to morph into a pupa and then cocoon in a process that encases the creature in a tan or gray chrysalis, which will hang from the stems of grass. This pupa stage allows for resting and further maturation. This metamorphosis takes approximately fifteen days. Following development as the chrysalis is the emergence of an adult mourning cloak butterfly.

Studies show that the mourning cloaks use endocrine mechanisms similar to other lepidopterans to regulate female specific protein synthesis, oogenesis, and male and female reproductive gland development. Juvenile hormone (JH) is involved in the regulation of oogenesis and development of the male and female reproductive glands in the mourning cloak butterfly.

Experiments carried out in Germany by Hubert Roer in 1962-68, documented a long-distance (one way) migration from Bonn to Greece (Chalkiditi). The adult butterflies hibernate during the winter month. Typical locations of overwintering include tree cavities and on the ground underneath loose tree bark (covered by snow). They are often one of the first butterflies seen in the spring. 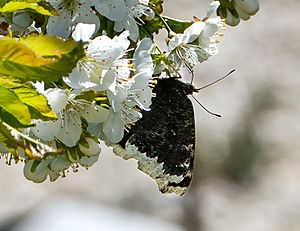 Upon hatching, the caterpillars will begin to eat the leaves of the larval food-plant. A larger number of food-plant plants were recorded, such as willow (Salix nigra, Salix pentandra, Salix caprea, Salix aurita, Salix cinerea, Salix phylicifolia), American elm, hackberry, hawthorn, wild rose, Betula species (Betula verrucosa, Betula chinensis), Alnus incana and poplar. The caterpillars live gregariously in communal silken nest on the host-plant, until they disperse prior to pupation.

An anti-predation mechanism the mourning cloaks have employed as adult butterflies is camouflage. To do this, the butterflies fold their wings back when attached to trees as their folded wings will provide camouflage against the dark backdrop of the trees.

An additional anti-predation tactic used by the mourning cloaks is to join together with other butterflies in a perch and fly menacingly towards their attackers—most often birds or other butterflies.

Further defense mechanisms include loud clicks when the mourning cloak flies away from a predator.

To protect themselves from the cold weather of their habitats, mourning cloaks will find areas under direct sunlight. This behavior, in conjunction with their darkly-colored wings, allow for maximum heat absorption.

Newly hatched mourning cloak caterpillars can display selfish behavior, such as siblicide, by eating non-hatched eggs. The larvae also group together for the duration of their development, preventing some predation by numbers. The larvae and pupae can also respond to disturbances by twitching simultaneously – this may be performed as a defense mechanism.

Mourning cloak butterflies are not known to be significant pollinators, since their primary food source is sap of deciduous trees rather than flowering plants. However, they still can occasionally act as pollinators.

On occasions, the gregarious mourning cloak larvae will completely defoliate ornamental trees, in nurseries, plantations, and parks. Some areas that this damage has been documented has been Oregon and Canada. The young willows and poplars could be completely defoliated due to the caterpillars, though mature trees tend not to be affected.

Mourning cloak butterflies have been a part of some epigenetics experiments testing to determine if the environment affects certain butterfly phenotypic characteristics. Scientists hypothesized that traumatic heat or cold shocks "during a critical period of its development can cause profound changes". The first experiments occurred in the 1890s. The mourning cloaks were temperature shocked at specific times in their development, which led to differences in pupae color. It was later learned that the color change was due to hormonal changes in response to varying temperatures.

Mourning cloak butterflies are protected by law in Switzerland and Austria, though they generally have an increasing trend regarding population density in Finland. They also assume "safe" status in the Czech Republic. In general, the mourning cloak butterflies find areas that have experienced fire breaks to be more inviting, presumably because the fire breaks increase the amount of open space and clearings available to the butterflies, which is a more ideal habitat for these butterflies to live in.

All content from Kiddle encyclopedia articles (including the article images and facts) can be freely used under Attribution-ShareAlike license, unless stated otherwise. Cite this article:
Nymphalis antiopa Facts for Kids. Kiddle Encyclopedia.