The African wildcats (Felis silvestris lybica) are small, fierce cats that live in forests, grasslands, and brush lands in Africa and the Middle East. They are the closest living relatives of the domestic cat.

It is a wildcat subspecies which occurs across northern Africa and extends around the edges of the Arabian Peninsula to the Caspian Sea. It is the most common and widely distributed wild cat, and is listed as Least Concern by IUCN since 2002.

Remains of domesticated cats were found in human burials in Cyprus, done by Neolithic farmers about 9,500 years ago. Hybrids between domestic cats and African wildcats are still common today. 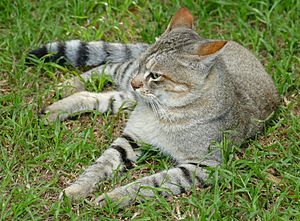 The fur colour of the African wildcat is light sandy grey, and sometimes with a pale yellow or reddish hue. The ears are reddish to grey, with long light yellow hairs around the pinna. The stripes around the face are dark ochre to black: two run horizontally on the cheek, and four to six across the throat. A dark stripe runs along the back, the flanks are lighter, and the belly is whitish. Pale vertical stripes on the sides often dissolve into spots. Two dark rings are on the forelegs, and hind legs are striped. The feet are dark brown to black. Its fur is shorter than that of the European wildcat, and it is considerably smaller. 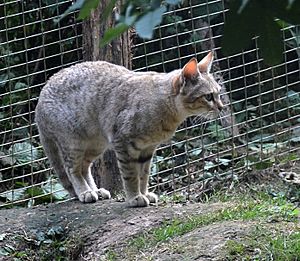 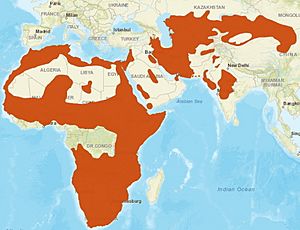 The African wildcat occurs across northern Africa, in the Near East, around the periphery of the Arabian Peninsula to the Caspian Sea. In Africa, it ranges from Morocco into Egypt, and inhabits the savannas of West Africa from Mauritania to the Horn of Africa, including Somalia, Eritrea, Ethiopia, Djibouti and Sudan, southwards to South Africa.

It inhabits a broad variety of habitats, especially in hilly and mountainous landscapes such as the Hoggar Mountains. But in deserts such as the Sahara, it occurs at much lower densities. Much better adapted to desert habitats is the sand cat. 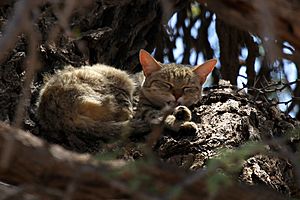 African wildcats are active mainly by night and search for prey. Their hearing is so fine that they can locate prey precisely. They approach prey by patiently crawling forward and using vegetation to hide. They rarely drink water. They hunt primarily mice, rats, birds, reptiles, and insects.

When confronted, the African wildcat raises its hair to make itself seem larger in order to intimidate its opponent. In the daytime it usually hides in the bushes, although it is sometimes active on dark, cloudy days. The territory of a male overlaps with that of up to three females. 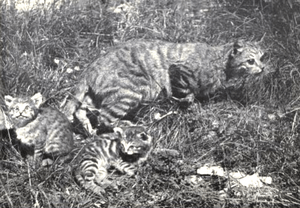 Females give birth from one to three kittens, mostly during the warm wet season. The African wildcat often rests and gives birth in burrows or hollows in the ground.

The gestation period lasts between 56 and 69 days. The kittens are born blind and need the full care of the mother. They stay with their mother for five to six months and are fertile after six months. 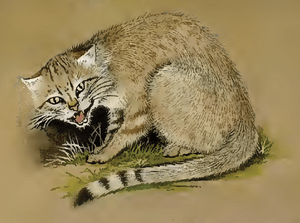 Illustration of a African wildcat

Domestication occurred in the Middle East possibly at more than one location in Egypt and Turkey. African wildcats were traded throughout the region resulting in genetic mixing. Egyptian art depicts the changing role of the cat from field hunter in 1950 BCE to human companion by 1500 BCE. These tamed Egyptian cats are thought to be the ancestors of domestic cats. 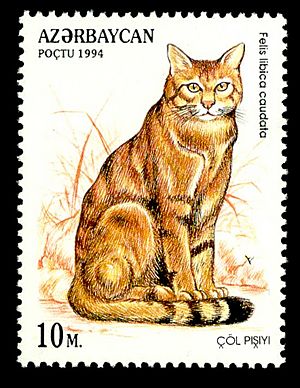 African wildcat on a 1994 stamp of Azerbaijan

Alley Cat Rescue is currently the only organization known to have a program specifically aimed at conserving African wildcats and reducing what some refer to as genetic pollution by domestic cats.

The Libyan Posts (General Posts and Telecommunications Company, GPTC) in cooperation with World Wide Fund for Nature, dedicated a postage stamp issue to Felis lybica on November 1, 1997. The issue was also released as a set of four stamps printed on a mini-sheet.

All content from Kiddle encyclopedia articles (including the article images and facts) can be freely used under Attribution-ShareAlike license, unless stated otherwise. Cite this article:
African wildcat Facts for Kids. Kiddle Encyclopedia.