The sand cat (Felis margarita), also known as the sand dune cat, is the only cat living chiefly in true deserts. This small cat is widely distributed in the deserts of North Africa, the Middle East and Central Asia. Starting in 2002, it was listed as near threatened on the IUCN Red List because the population was considered fragmented and small with a declining trend. It was downlisted to least concern in 2016.

Owing to long hairs covering the soles of its feet, the sand cat is well adapted to the extremes of a desert environment and tolerant of extremely hot and cold temperatures. It inhabits both sandy and stony deserts, in areas far from water sources. 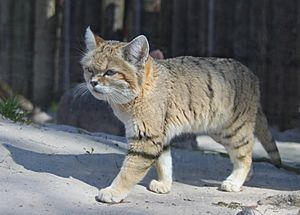 The sand cat's fur is of a pale, sandy, light brownish-yellow color. Markings vary between individuals: some have neither spots nor stripes, some are faintly spotted, some have both spots and stripes. There are dark brown to blackish bars on the limbs, and the tail has a black tip with two or three dark rings. The head is sandy brown, whereas the lower and upper lips, chin, throat, and belly are white. Some individuals have a yellowish throat.

The large, greenish-yellow eyes are ringed with white, and the nose is blackish and a faint reddish line runs from the outer corner of each eye across the cheeks. The cat's whiskers are white and up to 8 cm (3.1 in) long.

In Central Asia, the sand cat's winter coat is very long and thick, with hairs reaching up to 2 in (5.1 cm) in length. The sand cat’s claws on the forelimbs are short and very sharp, and claws on the hind feet are small and blunt. The undersides of its paws are protected from extreme temperatures by a thick covering of fur. 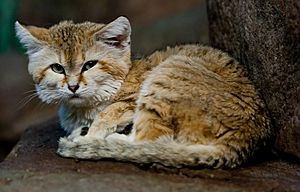 The long hairs growing between its toes create a cushion of fur over the foot pads, helping to insulate them while moving over hot sand. This feature makes the cat's tracks obscure and difficult to identify and follow. 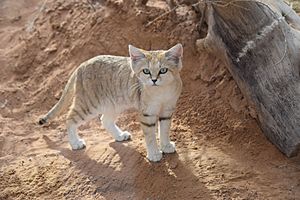 The sand cat is a solitary cat except during the mating season and when a female has kittens. It communicates using scent and scratch marks on objects in its range and by urine spraying. It makes loud, high-pitched and short rasping sounds, especially when seeking a mate. Its vocalizations are similar to those of the domestic cat. Sand cats have a low-pitched meow, but can also bark to communicate at long distances.

Its way of moving is distinct: with belly close to the ground, it moves at a fast run punctuated with occasional leaps. It is capable of sudden bursts of speed and can sprint at speeds of 30–40 km (19–25 mi) per hour. It buries its feces, covering it with sand. 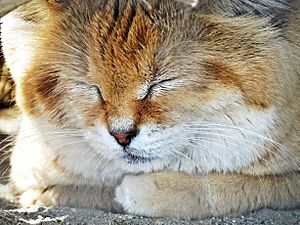 They are generally active throughout the night, hunting and travelling an average distance of 5.4 km (3.4 mi). They retired below ground at dawn and stayed in the burrow during the day.

Burrows are about 1.5 m (4.9 ft) deep and dug in slightly slanting ground with usually only a single entrance. These burrows were either abandoned by fox (Vulpes) or porcupines, or dug by gerbils or other rodents. In winter a sand cat stay in the sun during the day, but during the hot season, they are crepuscular and nocturnal. 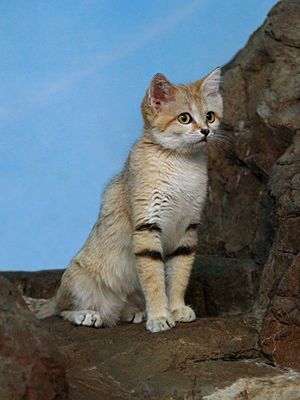 The sand cat inhabits both sandy and stony deserts. It is widely distributed in the deserts of North Africa, Southwest and Central Asia. It prefers flat or undulating terrain with sparse vegetation, and avoids bare sand dunes, where little prey is available. It retreats into burrows when climatic conditions are extreme.

Its diet is known to include small rodents such as gerbil and jerboas, insects, reptiles, including venomous desert snakes and birds. If they catch more than they can eat, they bury the remains for later consumption. They get their moisture requirements from their prey but drink readily if water is available. Toubou people in the Ténéré Desert accounted of sand cats coming to their camps at night and drinking fresh milk. In Israel, remains of Egyptian spiny-tailed lizards were found near burrows used by sand cats. 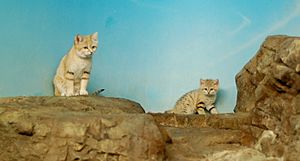 After a gestation of 59 to 66 days, they give birth to a litter of two to three kittens. They weigh 39 to 80 g (1.4 to 2.8 oz) at birth, and have spotted pale yellow or reddish fur. They grow relatively rapidly, reaching three quarters of the adult size within five months. They are fully independent by the end of their first year and reach maturity not long after. In some areas, sand cats give birth to two litters per year.

They can live up to 13 years in captivity. The life expectancy of wild sand cats has not been documented. 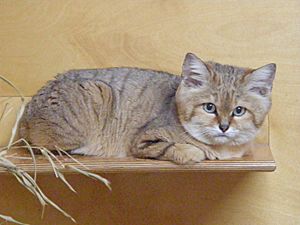 Habitat degradation is the major threat to the sand cat. Vulnerable arid ecosystems are being rapidly degraded by human settlement and activity, especially livestock grazing. The sand cat's small-mammal prey-base depends on having adequate vegetation, which may experience large fluctuations due to drought or declines due to desertification and loss of natural vegetation.

They also may be killed in traps laid out by inhabitants of oases targeting foxes and jackals or in retaliation for killing their chickens. In Israel, the sand cat is thought to be endangered by predators of larger carnivores such as caracal, wolf and domestic dog. 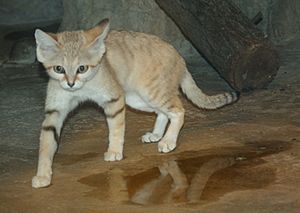 Captive sand cats are highly sensitive to respiratory diseases and infection of the upper respiratory tract. This is the main cause of death in adults. The most common disease is infectious rhinotracheitis. With sand cats being very susceptible to respiratory infections, they have to be kept in very arid enclosures, where humidity and temperature do not fluctuate.

As of May 2010, 29 sand cats were kept in 12 Association of Zoos and Aquariums-accredited institutions participating in the Species Survival Plan. In January 2010, the Al Ain Zoo announced the first success of an in vitro fertilisation and embryo transfer procedure on sand cats, resulting in the birth of two kittens at its facilities.

Of 228 sand cats born in zoos globally by 2007, only 61% of the kittens lived to day 30. They died primarily due to maternal neglect by first-time mothers. In July 2012, four sand cat kittens were born at the Ramat Gan Zoo as part of the European Endangered Species Programme.

All content from Kiddle encyclopedia articles (including the article images and facts) can be freely used under Attribution-ShareAlike license, unless stated otherwise. Cite this article:
Sand cat Facts for Kids. Kiddle Encyclopedia.