In vitro fertilisation facts for kids 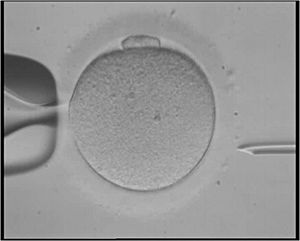 In vitro fertilisation (IVF) is a way to let sperm fertilise egg cells outside of the womb. IVF is used so that infertile women may still have children. "In vitro" is Latin for "in glass", referring to the test tubes.

The technique was developed in the United Kingdom by Doctors Patrick Steptoe and Robert Edwards. The first so-called "test-tube baby", Louise Brown, was born as a result on July 25, 1978. The first successful IVF treatment in the US (producing Elizabeth Carr) took place in 1981, and there have been 45,000 babies born with the aid of IVF treatment since then.

In brief, the process involves removing ova (eggs) from the woman's body and letting sperm fertilise them in a fluid medium. The fertilised eggs are then transferred to the mother's uterus where normal development occurs. IVF is used commonly when the father's sperm count is low or the mother's fallopian tubes are blocked.

All content from Kiddle encyclopedia articles (including the article images and facts) can be freely used under Attribution-ShareAlike license, unless stated otherwise. Cite this article:
In vitro fertilisation Facts for Kids. Kiddle Encyclopedia.