The gerbils are a family of rodents. There are about 110 species of gerbils. All gerbils are adapted to arid habitats. At one time, gerbils were known as desert rats. Most gerbils are diurnal, some are crepuscular. The gerbil is native to Central Asia, India, the Middle East, and Africa. The average length of a gerbil is usually between six and twelve inches, this includes the tail which makes up one half of the total length. The gerbil is also a common household pet.

Species of gerbil include:

The mongolian gerbil is one of around 110 species, but it is the most popular to have for a pet. The Mongolian gerbil was discovered in 1800 but was not studied until 1866. All domestic gerbils come from just a few gerbils from 1930.

A gerbil is smaller than a rat but bigger than a mouse. It depends on the species. From just mice and rats the gerbil has a tail with hair and it ends with a tassel. A gerbil is around 5-6 inches long but with the tail it is around 11-12 inches. There are bigger gerbils too like the Great gerbil who has a 7-8 inches long body and 7-8 inches long tail. 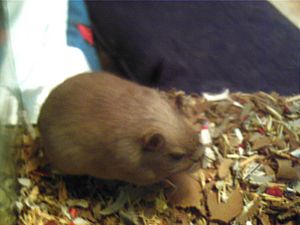 Gerbils are social animals, and live in groups in the wild. They rely on their sense of smell to identify other members of their clan, so it is important to use what is commonly referred to as the "split tank method" when introducing gerbils from separate litters. Gerbils are known to attack and often kill those carrying an unfamiliar scent. 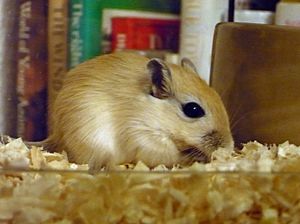 A young gerbil sitting by the food bowl to eat

Gerbils were first introduced to the pet industry in 1964. These were the Mongolian gerbils. Their value as pets was soon appreciated and they are now found in pet shops throughout the United Kingdom and United States. Due to the threat they pose to indigenous ecosystems and existing agricultural operations, it is illegal to purchase, import, or keep a gerbil as a pet in the US state of California. 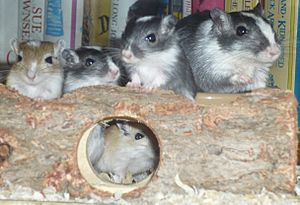 A common misunderstanding when purchasing a home for pet gerbils is they can live in housing designed for hamsters and mice. This is not correct, as they need to be able to dig tunnel systems, rather than have them created for them. The commonly plastic structure of hamster and mouse cages is inappropriate for gerbils due to their ability to gnaw through it very quickly. Plastic can cause serious health issues for the animal if ingested, therefore many owners refrain from having any plastic in the tank and rely entirely on wooden toys. Information from gerbil societies from throughout the globe is conflicting with regards to tank sizing. However, a common minimum given appears to be 10 imperial gallons (45 l) per gerbil. 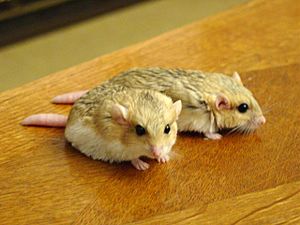 The several reasons for the popularity of gerbils as household pets include: The animals are typically not aggressive, and they rarely bite unprovoked or without stress. They are small and easy to handle, since they are sociable creatures that enjoy the company of humans and other gerbils. Gerbils also have adapted their kidneys to produce a minimum of waste to conserve body fluids, which makes them very clean with little odor.

All content from Kiddle encyclopedia articles (including the article images and facts) can be freely used under Attribution-ShareAlike license, unless stated otherwise. Cite this article:
Gerbil Facts for Kids. Kiddle Encyclopedia.