Djibouti (officially called the Republic of Djibouti) is a country on the eastern coast of Africa. The capital city is also called Djibouti.

Djibouti gained its independence from France on June 27, 1977. The country was created out of the French Somaliland (later called the French Territory of the Afars and Issas), which was created in the 1800s as a result of French colonialism in Africa.

In 2020, about 920,000 people lived there. It is one of the least populous countries in Africa. Two ethnic groups, the Somali and the Afar people, account for most of the people living in the country.

Djibouti joined the United Nations on September 20, 1977. It is also a member of the Arab League, as well as the African Union and the Intergovernmental Authority on Development (IGAD).

The history of Djibouti goes back thousands of years when it was part of the Sabean Empire (Ethiopia) to a time when Djiboutians traded hides and skins for the perfumes and spices of ancient Egypt, Pakistan, and China. Through close contacts with the Arabian peninsula for more than 1,000 years, the Somali and Afar tribes in this region became among the first on the African continent to accept Islam. Djibouti is a Muslim country which regularly takes part in Islamic as well as Arab meetings.

The country is close to a narrow part of the Red Sea so it is considered an important area from a military viewpoint.

Djibouti is near to the Horn of Africa. It is bordered by Eritrea in the north, Ethiopia in the west and south, and Awdal of Somalia in the southeast. The remainder of the border is formed by the Red Sea and the Gulf of Aden at the east.

In the Great Rift Valley the rift between the African Plate and the Somali Plate meet the Arabian Plate. This makes a geologic tripoint that is the lowest place in Africa.

Most species of wildlife are found in the northern part of the country, in the ecosystem of the Day Forest National Park. This forest area is the main habitat of the endangered and endemic Djibouti francolin (a bird). 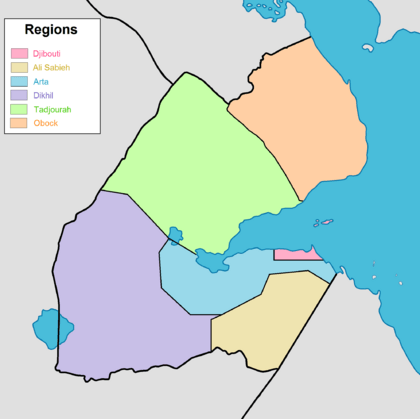 A map of Djibouti's regions.

Djibouti is divided into six administrative regions, with Djibouti city representing one of the official regions. It is further subdivided into twenty districts.

The people of Djibouti are mostly Muslim. Islam is observed by 94% of Djibouti's population (about 740,000) (2010 estimate). The remaining six percent follow Christianity.

The Republic of Djibouti names Islam as the only state religion. The Constitution of 1992 provides for the equality of citizens of all faiths as well as the freedom to practise any religion.

Association football is the most popular sport in Djibouti. The country became a member of FIFA in 1994. They have only played in qualifying rounds for both the African Cup of Nations and FIFA World Cup.

The country is linked to Ethiopia by way of the Addis Ababa–Djibouti Railway.

All content from Kiddle encyclopedia articles (including the article images and facts) can be freely used under Attribution-ShareAlike license, unless stated otherwise. Cite this article:
Djibouti Facts for Kids. Kiddle Encyclopedia.