Gulf of Aden facts for kids

The Gulf of Aden (Arabic: خليج عدن‎, pronounced Khalyj 'Adan; Somali: Khaleejka Cadan) is a gulf in the Indian Ocean. To its south is the Guardafui Channel, the Somali Sea and Somalia. To its north is Yemen. In the northwest, it connects with the Red Sea through the Bab el Mandeb strait. In the southwest, it connects with the Somali Sea through the Guardafui Channel. 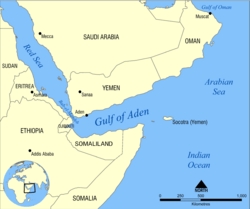 All content from Kiddle encyclopedia articles (including the article images and facts) can be freely used under Attribution-ShareAlike license, unless stated otherwise. Cite this article:
Gulf of Aden Facts for Kids. Kiddle Encyclopedia.