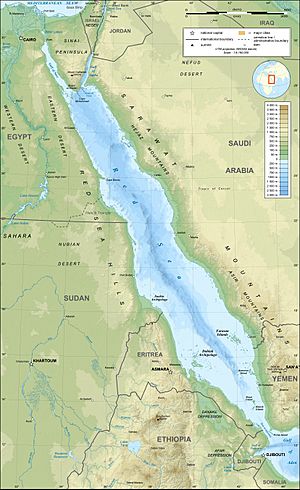 The Bab-el-Mandeb, meaning "Gate of Tears" in Arabic, is a strait between Yemen on the Arabian Peninsula, Djibouti and Eritrea, north of Somalia, in the Horn of Africa, and connecting the Red Sea to the Guardafui Channel and Gulf of Aden. It is sometimes called the Mandab Strait in the English language.

The strait gets its name from the dangers of traveling on it. Or, according to an Arab legend, from the numbers who were drowned by the earthquake which separated Asia and Africa.

The distance across is about 20 miles (30 km) from Ras Menheli in Yemen to Ras Siyan in Djibouti. The island of Perim divides the strait into two channels. The eastern channel, known as the Bab Iskender (Alexander's Strait), is 2 miles (3 km) wide and 16 fathoms (30 m) deep. The western channel, or Dact-el-Mayun, has a width of about 16 miles (25 km) and a depth of 170 fathoms (310 m). Near the coast of Djibouti is a group of smaller islands known as the "Seven Brothers".

All content from Kiddle encyclopedia articles (including the article images and facts) can be freely used under Attribution-ShareAlike license, unless stated otherwise. Cite this article:
Bab-el-Mandeb Facts for Kids. Kiddle Encyclopedia.