Kids Encyclopedia Facts
Not to be confused with Somalia.

Somaliland is an unrecognized state in middle-east Africa. It borders the Republic of Djibouti to the west, the Federal Republic of Ethiopia to the south and Somalia to the east.

Currently, Somaliland is an unrecognized state. This means that no country or international organization thinks that Somaliland is a real country. Instead, they include Somaliland as a part of Somalia.

Somaliland has a republican government, with free elections. The capital is Hargeisa. 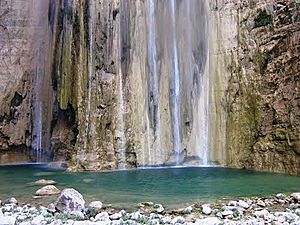 Lamadaya are waterfalls located in the Cal Madow mountain. 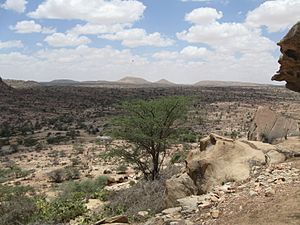 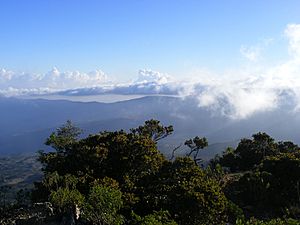 Somaliland is situated in northwestern Somalia. It lies between the 08°00' – 11°30' parallel north of the equator and between 42°30' – 49°00' meridian east of Greenwich. It is bordered by Djibouti to the west, Ethiopia to the south, and the Puntland region of Somalia to the east. Somaliland has a 740 kilometres (460 mi) coastline with the majority lying along the Gulf of Aden. In terms of landmass, Somaliland's territory is comparable to that of Uruguay, with an area of 176,120 km2 (68,000 sq mi). Somaliland's climate is a mixture of wet and dry conditions. The northern part of the region is hilly, and in many places the altitude ranges between 900 and 2,100 metres (3,000 and 6,900 ft) above sea level. The Awdal, Sahil and Maroodi Jeex (Woqooyi Galbeed) regions are fertile and mountainous, while Togdheer is mostly semi-desert with little fertile greenery around. The Awdal region is also known for its offshore islands, coral reefs and mangroves. A scrub-covered, semi-desert plain referred as the Guban lies parallel to the Gulf of Aden littoral. With a width of twelve kilometres (7.5 miles) in the west to as little as two kilometres (1.2 miles) in the east, the plain is bisected by watercourses that are essentially beds of dry sand except during the rainy seasons. When the rains arrive, the Guban's low bushes and grass clumps transform into lush vegetation. This coastal strip is part of the Ethiopian xeric grasslands and shrublands ecoregion.

Cal Madow is a mountain range in the northern part of the country. Extending from the northwest of Erigavo to several kilometres west of the city of Bosaso, it features Somalia's highest peak, Shimbiris, which sits at an elevation of about 2,416 metres (7,927 ft). The rugged east-west ranges of the Karkaar Mountains also lie to the interior of the Gulf of Aden littoral. In the central regions, the northern mountain ranges give way to shallow plateaus and typically dry watercourses that are referred to locally as the Ogo. The Ogo's western plateau, in turn, gradually merges into the Haud, an important grazing area for livestock.

Somaliland is located north of the Equator. It is semi-arid. The average daily temperatures range from 25 to 35 °C (77 to 95 °F). The sun passes vertically overhead twice a year, on 22 March and 23 September. Somaliland consists of three main topographic zones: (1). A Coastal Plain (Guban) (2) The Coastal Range (Oogo) (3) A Plateau (Hawd) The Coastal Plain (Guban) is a zone with high temperatures and low rainfall. Summer temperatures in the region easily average over 100 °F (38 °C). However, temperatures come down during the winter, and both human and livestock populations increase dramatically in the region.

The Coastal Range (Ogo) is a high plateau to the immediate south of Guban. Its elevation ranges from 6,000 feet (1,800 m) above sea level in the West to 7,000 feet (2,100 m) in the East. Rainfall is heavier there than in Guban, although it varies considerably within the zone. The Plateau (Hawd) region lies to the south of Ogo range. It is generally more heavily populated during the wet season, when surface water is available. It is also an important area for grazing. Somalilanders recognize four seasons in the year; GU and Hagaa comprise spring and summer in that order, and Dayr and Jiilaal correspond to autumn and winter respectively.

The average annual rainfall is 446 millimetres (17.6 in) in some parts of country according to availability of rain gauge, and most of it comes during Gu and Dayr. GU, which is the first, or major, rainy season (late March, April, May, and early June), experiences the heaviest rainfall in Ogo range and Hawd. This constitutes the period of fresh grazing and abundant surface water. It is also the breeding season for livestock. Hagaa (from late June through August) is usually dry although there are often some scattered showers in the Ogo range, these are known as Karan rains. Hagaa tends to be hot and windy in most parts of the country. Deyr (September, October, and early November), which roughly corresponds to autumn, is the second, or minor, wet season; as the word “minor” suggests, the amount of precipitation is generally less than that of Gu. Jilaal, or winter, falls in the coolest and driest months of the year (from late November to early March). It is a season of thirst. Hawd receive virtually no rainfall in winter. The rainfall in the Guban zone, known as “Hays”, comes from December to February. The humidity of the country varies from 63% in the dry season to 82% in the wet season.

Most people in Somaliland speak Somali and Arabic. Article 6 of the Constitution of 2001 says the official language of Somaliland is Somali, but Arabic is a mandatory subject in school. English is also spoken and taught in schools.

Almost all Somalilanders are Muslims. This is because Islam is the state religion, and practicing a religion other than Islam is against the law. Small amounts of non-Islamic traditions exist in Somaliland, but Islam is very important to the Somali sense of national identity.

Livestock is the backbone of Somaliland's economy. Sheep, camels, and cattle are shipped from the Berbera port and sent to Gulf Arab countries, such as Saudi Arabia.

Agriculture is generally considered to be a potentially successful industry, especially in the production of cereals and horticulture. Mining also has potential, though simple quarrying represents the extent of current operations, despite the presence of diverse quantities of mineral deposits. 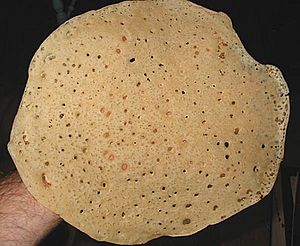 It is considered polite for one to leave a little bit of food on one's plate after finishing a meal at another's home. This tells the host that one has been given enough food. If one were to clean their plate that would indicate that one is still hungry. Most Somalis do not take this rule so seriously, but it is certainly not impolite to leave a few bits of food on one's plate. Somali breakfast typically includes a flatbread called lahoh (injera), as well as liver, toast, harakoo, cereal, and porridge made of millet or cornmeal. Lunch can be a mixture of rice or pasta with meat and sauce.

Also consumed during lunchtime is a traditional soup referred to as maraq, which is also part of Yemeni cuisine. Maraq is made of vegetables, meat and beans and is usually eaten with flatbread or pita bread. Later in the day, a lighter meal is served that includes beans, ful medames, muffo (patties made of oats or corn), or a salad with more lahoh/injera.

All content from Kiddle encyclopedia articles (including the article images and facts) can be freely used under Attribution-ShareAlike license, unless stated otherwise. Cite this article:
Somaliland Facts for Kids. Kiddle Encyclopedia.