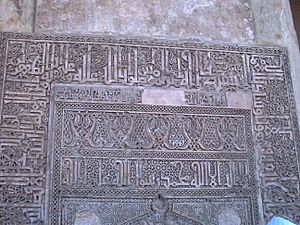 The Qibla of the Fatimid caliph al-Mustansir Billah in the Mosque of Ibn Tulun, Cairo showing the Shi'i shahada with the phrase ʿalī walī allāh at the end.

The shahadah (Arabic: شهادة‎code: ar is deprecated ) is the Islamic creed. It means "to testify" or "to bear witness" in Arabic. The shahadah is the Muslim declaration of belief in the oneness of God and in Muhammad as his final prophet. Recitation of the shahadah is one of the Five Pillars of Islam for Muslims and is said daily.

Another rendering current amongst some English-speaking Muslims, but without a historical tradition, is:

This version constitutes an interpretation rather than translation, as the words "worthy of worship" are not present in the Arabic.

A single honest recitation of the shahādah in Arabic is all that is required for a person to become a Muslim according to most traditional schools.

All content from Kiddle encyclopedia articles (including the article images and facts) can be freely used under Attribution-ShareAlike license, unless stated otherwise. Cite this article:
Shahada Facts for Kids. Kiddle Encyclopedia.