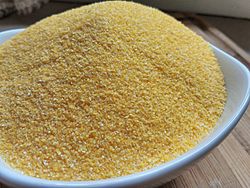 Cornmeal is a meal (coarse flour) ground from dried corn. It is a common staple food, and is ground to coarse, medium, and fine consistencies, but not as fine as wheat flour. In Mexico, very finely ground cornmeal is referred to as corn flour. When fine cornmeal is made from maize that has been soaked in an alkaline solution, e.g., limewater (a process known as nixtamalization), it is called masa flour, which is used for making arepas, tamales and tortillas. Boiled cornmeal is called polenta in Italy and is also a traditional dish and bread substitute in Romania.

There are various types of cornmeal: 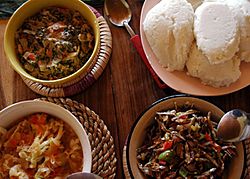 This is a local dessert dish made from maize flour in which milk, sugar, dried sultanas and cardamon powder are cooked together. The cooked paste is poured on a tray and coconut powder is sprinkled thereon and left to cool. This dessert is often cut into triangular shapes and can be bought from food vendors in the streets of Port Louis and also in market fairs around the island. 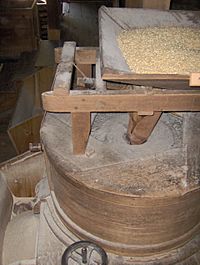 Grindstones inside Mingus Mill, in the Great Smoky Mountains of North Carolina. Corn is placed in a hopper (top right) which slowly feeds it into the grindstone (center). The grindstone grinds the corn into cornmeal, and empties it into a bucket (lower left). The grindstones are turned by the mill's water-powered turbine. 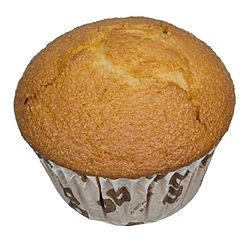 In parts of northern India and Pakistan ground corn flour is used to make thick slabs of bread which can be eaten with a wide variety of curry dishes or it can be coated in clarified butter or ghee and eaten with yogurt or lassie which is a yogurt based drink especially in summer.

All content from Kiddle encyclopedia articles (including the article images and facts) can be freely used under Attribution-ShareAlike license, unless stated otherwise. Cite this article:
Cornmeal Facts for Kids. Kiddle Encyclopedia.