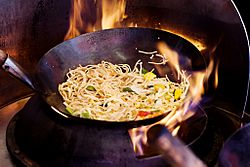 Cooking in a wok

A wok is a Chinese pan used for cooking. It has a round bottom. The most common use for the wok is stir frying, though it can also be used for deep frying, smoking, braising, roasting, grilling, and steaming.

In Indonesia, the wok is known as a wadjang, kuali in Malaysia, and kawali (small wok) and kawa (big wok) in the Philippines.

All content from Kiddle encyclopedia articles (including the article images and facts) can be freely used under Attribution-ShareAlike license, unless stated otherwise. Cite this article:
Wok Facts for Kids. Kiddle Encyclopedia.